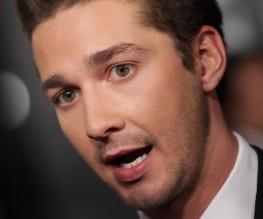 SO, this is fun. Shia LaBeouf, best known for being in literally no good films ever (except maybe Constantine) has been carving out a fun little niche for himself over the past few years by self-publishing insanely bad comic books and dropping out of Broadway shows and basically doing everything that nobody likes. We’d be thoroughly unsurprised to discover that he’s been coordinating wildcat drone strikes on Pakistani schools. But his latest adventure really does take the biscuit.

After appearing at several film festivals, LaBeouf’s directorial debut HowardCantour.com debuted online a day or two ago to widespread acclaim. That is, at least, until someone noticed that it was really, really heavily plagiarised from Justin M. Damiano, an indie comic by one Dan Clowes. Oops. LaBeouf responded to the barrage of criticism on Twitter, like so:

Copying isn't particularly creative work. Being inspired by someone else's idea to produce something new and different IS creative work.

In my excitement and naiveté as an amateur filmmaker, I got lost in the creative process and neglected to follow proper accreditation

Im embarrassed that I failed to credit @danielclowes for his original graphic novella Justin M. Damiano, which served as my inspiration

I was truly moved by his piece of work & I knew that it would make a poignant & relevant short. I apologize to all who assumed I wrote it.

You certainly did, mate. Dan Clowes has confirmed that he’s never heard from Shia LaBeouf before, and certainly didn’t know his work was being ripped off (because that’s what you did, Shia – you didn’t “neglect to follow proper accreditation”, you stole someone’s work because you stupidly thought you were unassailable). Oh, and you plagiarised your apology – AGAIN. When Shia dropped out of a Broadway play a couple of years ago, he sent Alec Baldwin a pretentious apology email which he then tweeted, revealing to the world that he’d copy-pasted it from an Esquire article; this time he’s gone a bit more downmarket by stealing his apology from Yahoo Answers.

As several people have said on Twitter, the odds are on that Shia LaBeouf will be in rehab or therapy or whatever within the week, blaming this whole thing on an addiction or a made-up illness. But we’ve got your number, Shia. Piss off back to the Kingdom of the Crystal Skull.

Do you think Shia is finished? Do you think he ever started? Can you spell his name first time? SO MANY QUESTIONS!