Stephen Fry has worst weekend ever 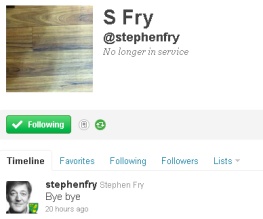 Oh dear, Mr Fry. It’s been a sad old Hallowe’en for the actor, writer, Twitter guru and ‘national treasure’, and no mistake.

Assuming you’re not plugged into the Twittersphere as enthusiastically as we are, here’s what’s gone down. On Thursday, Fry was shooting Sherlock Holmes 2 (he’s Mycroft, remember?) at Leavesden studios in God’s own Watford. Lucky him.

He sneaked off for a stroll around the abandoned set of Harry Potter and the Deathly Hallows, and then decided it would in some way not be MASSIVELY STUPID to Tweet some photos of Hogwarts in ruins. Warner Brothers cracked down on him and the photos disappeared, to be replaced by a slightly peeved message:

So far, so silly. However, the shit hit the fan in no uncertain terms yesterday morning when the Observer ran a story based on an interview with Fry printed in the current issue of Attitude magazine. In it, Fry apparently suggests that women have no interest in sex but see it as the price they pay for a stable relationship, and that if women had a sex drive there would be straight cruising areas in the same vein as Hampstead Heath etc. (He’s obviously never been to a Bournemouth nightclub). Furthermore, he inexplicably claims that straight men should be pitied as their libidos are essentially hamstrung by women’s nefariously political use of their favours, and that gay men are the only humans who are able to fornicate exactly as they want to. Because all gay men are impossibly promiscuous and horny, all the time. Obviously.

This inexpressibly stupid sentiment provoked a fair-sized Twitter shitstorm, of the sort which Fry has provoked before now but never been the recipient of. He didn’t like it, posting this:

…and then saying “Bye bye” before apparently deserting his account (although it’s not been deleted, leaving him an easy route back online).

Incidentally, you may remember that a year to the day before this rather melodramatic reaction, Fry threatened to leave Twitter in protest after one user was mildly arsey to him. He’ll be back, surely? We do hope so – assuming the interview went as claimed, Mr Fry’s remarks were clearly ill-judged humour rather than genuine misogyny. Or so we’re choosing to believe.

Previous: Due Date
Next: The Texas Chainsaw Massacre is back… again.