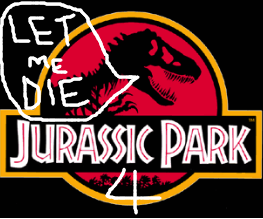 A while back we reported that the Jurassic Park 4 rumbling were moving beyond simply faceless rumour and into real-life words and actions, but we still had yet to hear from big man Spielberg himself. Well, the day has now arrived. Jurassic Park 4 is definitely happening.

He told Shock Till You Drop today: “I haven’t been active in the last year because I’ve been so busy obviously on War Horse, Tintin and now I’m currently shooting Lincoln, but right now, it’s on the schedule to bring out another Jurassic Park.”

Now, we’re not sure if Steven is familiar with the science of graphs, at all, but we’ve helpfully compiled a visual that we feeling accurately represents our central worry with the concept of Jurassic Park 4: You see, Steven? You see the problem with this idea, mathematically?

At least if Spielberg is back at the helm it might be a step up from Jurassic Park 3 (which was directed by Joe Johnston). Might it? Why does it have to be Jurassic Park, Steve? You want to make a dinosaur film, you go right ahead. Just let this poor, ill franchise be. Leave the park gates closed, Steve. Haven’t those creatures suffered enough?

Previous: Gainsbourg and Von Trier to reunite for Nymphomaniac
Next: WIN Transformers: Dark Of The Moon on DVD