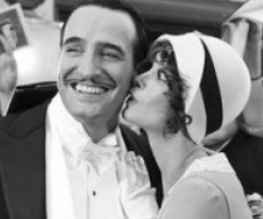 Well, it was quite the evening. Difficult to tell which moment was the most memorable – from Ryan Seacrest getting a faceful of Kim Jong Il’s ‘ashes’ courtesy of Sacha Baron Cohen, to Angelina flashing that leg of hers, to the cast of Bridesmaids doing shots on-stage like massive Lads – the only thing we could be sure of was that poor old Harry Potter was probably going home empty-handed. And we were right.

In the end it was The Artist and Hugo that walked away with the big numbers – winning five awards apiece. The Artist snaffled the coveted Best Picture prize, as well as Best Actor for Jean duJardin, Best Director for Michel Hazanavicius, Best Original Score and Best Costume Design. Hugo picked up all the awards people don’t care about, bless it, winning Best Cinematography, Best Art Direction, Best Visual Effects, Best Sound Mixing and Best Sound Editing.

Best Actress went to Meryl Streep for The Iron Lady, a decision that would have irritated the world had it not been for the fact that it’s physically impossible to feel anything except happiness when nice things happen to Meryl Streep. Best Supporting Actress went to Octavia Spencer for her role in The Help and Best Supporting Actor went to Christopher Plummer for Beginners – making him the oldest actor to win an Oscar, at age 82. The same age as The Oscars themselves, as it happens. Best Foreign Language Film went to the brilliant A Separation, and Best Animated Feature went to Rango.

We stand by the fact that an awards ceremony that fails to honour Senna, Tyrannosaur, We Need To Talk About Kevin or Drive is at best vaguely interesting rather than particularly meaningful, but heck, what do we know? We’re just a group of experts who definitely know everything. Anyway, the rest you can figure out for yourselves with out full listings below, till next year!

The Artist
Bridesmaids
Margin Call
Midnight in Paris
A Separation

Pina
Hell and Back Again
If A Tree Falls: The Story of the Earth Liberation Front
Paradise Lost 3
Undefeated

“Man or Muppet” from The Muppets
“Real in Rio” from Rio

Harry Potter and the Deathly Hallows: Part 2
Hugo
Real Steel
Rise of the Planet of the Apes
Transformers: Dark of the Moon

The Girl with the Dragon Tattoo
Moneyball
Hugo
Transformers: Dark of the Moon
War Horse

Drive
The Girl with the Dragon Tattoo
Hugo
Transformers: Dark of the Moon
War Horse

BEST DOCUMENTARY SHORT
The Barber of Birmingham: Foot Soldier of the Civil Rights Movement
God Is the Bigger Elvis
Incident in New Baghdad
Saving Face
The Tsunami and the Cherry Blossom