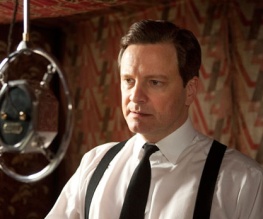 The box office receipts are in, and all is as it should be – impossibly delicious drama The King’s Speech took a positively gilded £3.5m on its UK opening weekend, sending it straight to the top of the leaderboard. We’re very happy. The other medallists are Danny Boyle’s 127 Hours (£2.2m) and accursed rubbish Little Fockers, manfully clinging to third place despite having been released before Christmas.

Last week’s top grossing film Gulliver’s Travels slipped to fourth place whilst Russell Crowe’s prison break movie The Next Three Days debuted in fifth. Love and Other Drugs slipped from third place to sixth quicker than Anne Hathaway’s on-screen knickers, and fantasy epics Harry Potter and the Deathly Hallows: Part 1, Tron: Legacy and The Chronicles of Narnia: The Voyage of the Dawn Treader grimly hung on in seventh, eighth and ninth places respectively. What is it about massive franchises and colons, eh?

Oh, and Season of the Witch debuted at number ten, which is still approximately five thousand places too high. Ha!