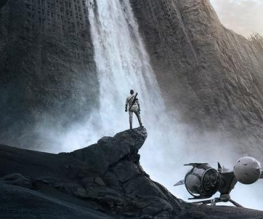 Tom Cruise has been rather busy of late. Not content with kicking all the ass in Jack Reacher, he has also been shooting scenes for All You Need Is Kill over the skies of London and has signed up for Our Name Is Adam, yet another sci-fi time-screwing fiasco. Now the first trailer for Oblivion has arrived and Tom Cruise looks as fantastically insane as we’d all hoped.

Oblivion (sadly not an adaptation of The Elder Scrolls game) is set on an abandoned Earth, evacuated after an (alien?) invasion destroyed much of the planet’s infrastructure. Tom Cruise stars as Future Tom Cruise (limited edition), some kind of drone-repair engineer/badass space marine with a big ol’ gun. With 2 weeks before he can rejoin the other Earth survivors, Tom Cruise makes friends with a hilariously sinister Morgan Freeman and his evil rebel crew, finds some sort of stasis pod with Olga Kurylenko floating in it and flies a knob-shaped plane.

It looks perfect. Tom Cruise looks a little haggard in it, reminding us all that the inimical, inequitable and indelible march of time decays all beauty in the world, but that’s just a personal opinion. He still looks great though, doing all the Tom Cruise-ian things we’ve come to expect, like shouting at shadows and running and stuff. A lot of mystery still surrounds the plot of the film, and this trailer has done nothing to illuminate the finer details. We haven’t seen anything of Zoe Bell in Oblivion yet – we eagerly await her return after her phenomenal car-hanging role in Death Proof.

We’ll have to wait a mere 4 months before we get to see Tom Cruise killing things again, in the meantime here’s the Oblivion poster to tide you over: 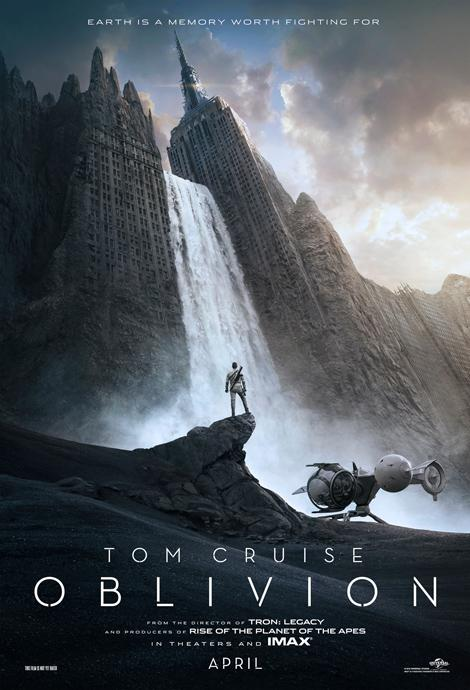 Tom Cruise will look crazy and paranoid when Oblivion smashes into Earth cinemas on 12th April 2013.

Excited for Oblivion? Has Tom Cruise still got it?