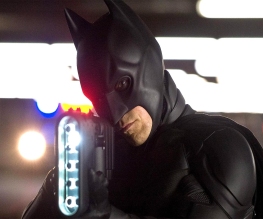 As the world’s critics high-fived their way out of preview screenings, and the first handful of gushing love-letters found their way online, the initial reactions to Christopher Nolan’s The Dark Knight Rises were almost exclusively in its favour. I say almost, because Rotten Tomatoes brazenly hosted one review that dared to disagree: critic Marshall Fine thought Nolan’s latest was rotten, thereby depriving it of a perfect 100% fresh rating. Naturally, he had to die.

At least, that was the general gist of the 1,000 comments that his review quickly attracted, crashing his own site’s server and leading Rotten Tomatoes to close the film’s comments section until further notice. Some merely voiced their new-found hatred of Fine, others threatened (and temporarily succeeded) to destroy his website, but what really shocks is the number of users who actually threatened his life. One particular troll even suggested that he simply “die in a fire”.

Not shy about responding to such vitriol, Rotten Tomatoes quickly tweeted a reminder to would-be commenters that any violation of their terms of service would see users banned indefinitely from the site, before eventually being forced to remove the option altogether. While their tone remained jocular (“We’re trying to have fun here, so don’t be a dick”), the moderators are nevertheless looking into a new system that will prevent users from posting anonymously.

While trolling is nothing new amongst dedicated fanbases (they just don’t make bridges like they used to), there is something about the so-called Nolanites that sets them apart from the rest of geekdom. While the Twilight crowd are largely made up of teenage girls and Mormon housewives, and the once-strong Trekkie crowd were erased from the space-time continuum by J. J. Abrams’ reboot, Nolan’s (naturally humourless) mob are apparently insatiable; staggeringly self-righteous in their near-religious and unforgiving mistreatment of those who disagree – whether or not they have even actually seen the film in question themselves. That’s all it is, after all. A film. Why so serious?

With the much-anticipated Third Coming due this Friday when The Dark Knight Rises opens to audiences everywhere, it is unlikely that a temporary banishment from Rotten Tomatoes will do much to stem the flow of bile. By all means, go and enjoy, but for the love of Batman just try not to lynch anyone  on the way out – particularly those who don’t bow down in adoring worship come the end credits.