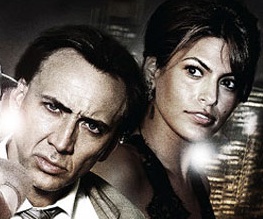 As an exercise in controlled madness, Werner Herzog’s remake – or is it? – of Abel Ferrara’s celebrated 1992 film certainly has plenty of screws loose before the credits roll. The charismatic German director has often been drawn to eccentric loners in his documentaries and demented heroes in his works of fiction. His tempestuous working relationship with actor Klaus Kinski on Aguirre: Wrath Of God, Nosferatu and Fitzcarraldo is the stuff of Hollywood legend – the filmmaker famously threatened his leading man with a loaded gun to prevent him from walking off set. For his version of Bad Lieutenant, Herzog collaborates with Oscar-winning actor Nicolas Cage, who has been known to play a few wide-eyed oddballs in his time in pictures such as Face/Off, Wild At Heart and Kick-Ass.

The talents behind and in front of the camera are perfectly matched for this hallucinogenic portrait of a morally bankrupt cop teetering on the brink of self-destruction, who doesn’t care how many people he takes down with him. Herzog transplants the action to New Orleans in the aftermath of Hurricane Katrina. Terence McDonagh (Cage) is a Vicodin-addled cop, who prowls the streets of the beleaguered city, handing out his version of tough justice when he isn’t popping pills or taking drugs. When a trip to the evidence room to procure seized narcotics ends in rejection, Terence becomes increasingly creative to get his fix, using his badge to sexually abuse women on the street in front of their terrified boyfriends while rifling through their belongings for illegal substances.

Prostitute girlfriend Frankie (Eva Mendes) is more than happy to accept drugs from her beau, and feed her insatiable habit. The murders of a family of five and the activities of local drug lord Big Fate (Alvin Joiner) prove an unwelcome irritation. All the while, Terence’s partner Stevie (Val Kilmer) struggles to keep his colleague in check – the sort of loose cannon who has a “lucky crack pipe” and giggles maniacally during one heated exchange, “Shoot him again… his soul’s still dancing!”

Bad Lieutenant plunges us deep into the grimy underbelly of a city scarred by the terrifying power and rage of Mother Nature. For once, Kilmer is a model of restraint, playing a relatively straight man to Cage’s increasingly unhinged enforcer of a law he regards with disdain. Cage embraces his character’s insanity with a fury, conducting a unique version of community policy when he berates one elderly resident with an oxygen mask: “Why don’t you drop dead? You’re the reason this country’s going down the tubes!” By the time we surface two hours later, we’re desperate for a shower to wash off all of the sleaze and degradation. Fabulous, insane stuff.

What did you make of the drugs-fuelled ride that is Bad Lieutenant? Let us know…

Previous: Girl With The Dragon Tattoo the English version?
Next: Prince Of Persia: The Sands Of Time Review