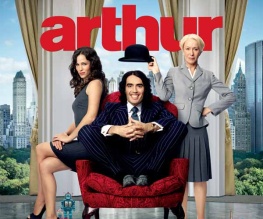 What do you get when you take a critically acclaimed 80s comedy and add a director who’s never made a film before, the screenwriter who churned out Borat and professional ex-playboy Russell Brand? You get Arthur, the big-budget remake which stars Brand alongside Helen Mirren as his long-suffering nanny, taking over a male role for the second time this year (John Gielgud played Dudley Moore’s valet in the original film; Mirren has also got her Prospero on in The Tempest). There’s nothing badly wrong with Arthur, which is charming and silly in all the right places; the trouble is, it’s empty in all the wrong ones.

If you’re a New York City policeman, there’s one repeat offender who you don’t want to have wandering onto your beat; Arthur Bach (Brand), the hopelessly alcoholic corporate heir who lives for fun alone. Well, fun and whisky and ill-advised sexual encounters alone. And having a hovering magnetic bed. And a Batmobile. You get the idea. Arthur careers around NYC leaving a trail of destruction in his wake, flinging cheques at all and sundry and occasionally buying (and wearing) one of Abraham Lincoln’s suits just because he feels like it; the only thing keeping him from total collapse is his devoted but sharp-tongued nanny Hobson (Mirren), who has semi-successfully replaced both his driven, neglectful mother Vivienne (Geraldine James) and his deceased father.

Unfortunately for Arthur, Vivienne is not prepared to have his antics knock Bach Worldwide’s share prices forever, so she delivers an ultimatum – either Arthur marries her employee Susan (Garner), the scion of a construction magnate and a tediously safe pair of hands, or his $950m fortune is cut off. Arthur capitulates, but not long after he bumps into illegal tour guide and aspiring author Naomi (Gerwig), who catches his eye more emphatically than all the dreadfully expensive prostitutes in Manhattan. Will Arthur have the courage to choose love over spondulicks, or will his extraordinary lifestyle prove too strong a draw to consider giving up? We’re not sure if we mentioned this, but he does quite literally have a hovering magnetic bed. Russell Brand’s Hollywood career (which, lest we forget, is only four years long) has basically revolved around him playing a series of characters who are: eccentric, foppish, philandering, possessed of a talent for wordsmithery and, lest we forget, really, really, really fucked on something – basically Russell Brand pre-marriage and/or pre-kicking hard drugs. Arthur is no exception, except that this time Brand’s charmingly debauched character is drunk rather than high.

Arthur is a totally safe choice of role for the increasingly anodyne Russell; he gets to charge around in his underwear, drive a variety of ridiculous cars, smash things up with reckless abandon and make smutty jokes to Helen Mirren, it’s true, but at this stage it’d be much more impressive to see him in a dour period tragedy or a blue-collar drama. His lines are good, his comic timing is superb and his delivery is as flamboyant (if atonal) as ever, but there’s nothing new here at all; probably the best that can be said of his performance is that it’s substantially less irritating than Dudley Moore’s shrieking 80s Arthur. Helen Mirren is understated and brilliant, as usual, and Greta Gerwig’s defiantly normal Naomi is believable and possessed of enough personality to counteract a typically boring performance from Tedious Jennifer Garner. Stylistically, the film is captivating and fresh – its end credits, which were over-kooky but still pleasant, were a particular highlight, accompanied as they were by the song which won the original Arthur one of its two Oscars. First-time director Jason Winer does give the impression of having been allowed to run away with the budget, but the extraordinarily OTT set-pieces unintentionally serve to elevate the film from rich-boy-poor-girl fable into something more reminiscent of a proper fairy story. It’s not particularly clever or particularly memorable, but charming performances and an original look at well-crafted characters make this slightly more worthwhile than the standard dross which drips from the remake mincer.

Previous: Scream 4
Next: Save our Independent Cinemas! This week: the Duke of York