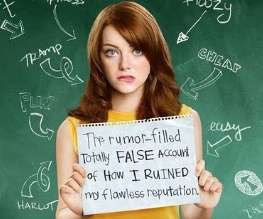 Our protagonist Olive (Stone) is – as almost every teen comedy starts – a nobody at the school she attends. Begrudgingly accepting of her underling status, she drifts through her classes looking forward to the day she can start college, and all her knowledge about Sylvia Plath, her air guitaring and various witty comebacks will finally be appreciated. Until then, however, all she can do is silently lust after her childhood sweetheart, hang out with her exceedingly cool parents and constantly appease her terrifying best friend Rhiannon, whilst never quite extinguishing the wish that she was making some kind of impact.

One day, after another Monday morning spent trying to quell Rhiannon’s need for gossip, something within Olive snaps, and before she knows it, she’s lied about losing her virginity to a mysterious stranger. But – as anyone who’s watched a high school comedy knows – the ladies room isn’t the place to keep a secret, and it doesn’t take long for news to spread. To Olive’s utter bemusement, she’s suddenly the talk of the school. And when a gay friend begs her to pretend they’ve had sex so that he can finally shake off endless bullying, Olive can’t see the harm. After all, he needs her help and frankly, she’s kind of enjoying the attention. Throwing caution to the wind, she begins to revel in the scandal, indulging anyone who wishes to become part of it. But, of course, it doesn’t take too long for Olive to learn that infamy isn’t the same as popularity, and with the whole school – led by a group of evangelical Christians – branding her a skank, it soon becomes difficult for the intellectual Olive to retain her devil-may-care attitude…

Written by relative unknown Bert V. Royal, Easy A is saved from fading into the teen-comedy wallpaper because of its absolutely brilliant script. From scathing attacks on the Facebook generation (“I don’t know what your fascination is with documenting your every thought… but I can assure you, they’re not all diamonds. ‘Roman is having an OK day, and bought a Coke Zero at the gas station. Raise the roof.’?”) to unapologetic mockery of Christian fundamentalism (“We’ve had nine classes together since Kindergarten… ten if you count Religion of Other Cultures, which you didn’t because you called it science fiction and refused to go”), Easy A is peppered with wonderful one-liners. Royal’s slightly surreal brand of satire fits his lead actress perfectly, and thus Emma Stone is a joy to watch, delivering lines like “Jesus, why are you homos so afraid of girl parts, what do you think we’ve got down there, a gnome?” to perfection. For what it’s worth, the story isn’t as tightly plotted as teen-classics like Clueless or Mean Girls, and a “cheating teacher” sub-plot involving Thomas Haden Church and Lisa Kudrow (who every day looks more and more like an eagle being smothered by a cushion) gets a little out of control. But, to be honest, with such a uniformly brilliant cast and genuinely refreshing dialogue, its difficult to care. Stanley Tucci and Patricia Clarkson as Olive’s witty and carefree parents are a particular highlight, providing a much-needed alternative to the “disapproving parental unit” we’re so used to seeing.

Funny, silly and almost too clever for its own good, Easy A is a cut above the average comedy, and deserves its place among teen-flick royalty. It’s refreshing to see a female lead with the easy going charm of Lindsey Lohan (before the bad things) combined with the dry wit of Ellen Page. In fact, the only thing that’s difficult to believe about Easy A is that a character so charming and witty as Olive could ever have any problems standing out to begin with.