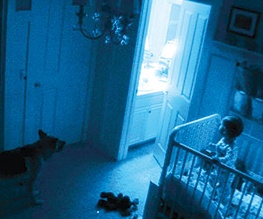 One upon a cash-in…

The film acts as a prequel to the first film, beginning a few months before the events of the original in the house of Ali (Molly Ephraim) and Daniel (Brian Boland). It transpires that Ali is the sister of Katie – the female lead in the first movie – and the plot kicks off when the young couple discover their home has been ransacked shortly after bringing their new-born baby back home from the hospital. Nothing valuable is taken, but as a result, they install security camera all over the house. Which, it turns out, is rather handy when things start to get weird.

Objects move, doors slam – well, if you’ve seen the first one you know the drill by now. And that is part of the problem. In terms of scares, Paranormal Activity 2 does not attempt to build or develop the ghostly goings on but rather does much of the same thing, only with more frequency and usually in a bigger way. Without the subtlety and carefully constructed build up/release of the first film, many of the supposed scares in Paranormal Activity 2 end up being laughable. The two main offenders involve a levitating baby and Ali being dragged away by unseen forces. Both of which feel more like Peter Pan has sprinkled pixie dust on them rather than the work of a malevolent spirit.

While the original was cleverly filmed using handheld camera, showing us the ‘real footage’ as if someone had found the camera lying around and just pressed play, this film relies heavily on the CCTV footage from within the house. The presence of the security cameras and the family’s strange willingness to pick up their handheld camera stretches believability and lacks the artfulness and immediacy of the first film. The filming also suggests a creator at work as it cuts between home movie style footage and CCTV, taking you out of the film’s conceit and back to the reality of watching a Hollywood movie that has been through the editing room.

To be fair to Paranormal Activity 2, it at least tries to do more than simply cover old ground by building on the mythology of the first film rather than rehashing it. While I knew what sort of scares were coming, I found that I no longer knew why and this kept the suspense high. Ultimately however, we end up knowing too much and seeing too much – by going deeper into the overall agenda of the “evil presence”, any overhanging questions are extinguished and the pure fear of the unknown is taken away. The “big reveal” itself is clunky and convenient, and the film then descends into horror cliche with the family nanny miraculously knowing exactly how to deal with the situation. Like the psychic from Poltergeist. Or the psychic in Jeepers Creepers. Or the unattractive psychic woman in any horror film you care to mention.

Perhaps I am being harsh on a film that delivered more than adequate scares, but the original Paranormal Activity is a tough act to follow. As horror sequels go, it is above the average, adding satisfying plot developments and a few good shocks. But Paranormal Activity 2 won’t have you checking for monster under the bed, or wondering if that shadow on the wall moved. In its attempts to break out of the darkness cast by the original’s shadow, Paranormal Activity 2 may just have taken itself too far into the light.