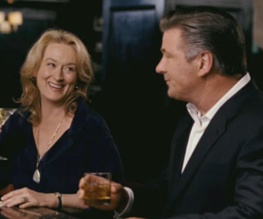 We at Best For Film are probably safely in the majority if we say we’ve never seen Meryl Streep in a bad movie. So it’s not too surprising that in recession-era Hollywood, where only the surefire box-office earners are getting made, a rom-com with her name in the top billing is one of January’s big releases. When you add director Nancy Meyers (What Women Want, Something’s Gotta Give) to the mix, it’s virtually a written guarantee to fans of the genre that you’re in for an enjoyable 90 minutes. And with Meyers’ generally sharp and incisive writing, it might even be a cut above your average brainless rom-com. It’s Complicated certainly delivers on the first count, but whether it does on the second is debatable.

Did you enjoy Meyers’ latest comedy, or could it be – shock horror – the first bad film Meryl Streep’s been in? Let us know below.