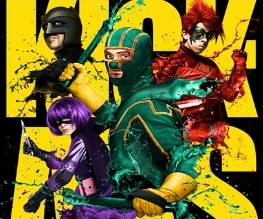 Enter the next generation of comic-book movies. Kick-Ass is truly a brilliant and original take on a sorely overdone franchise, but if you’re looking for a laugh-a-minute flick you’ve come to the wrong place. Kick-Ass is not for the faint of heart, with humour as black as coal and violence to rival the goriest of horrors. However, it could be that it’s all the better for its darkness.

See No Evil, Hear No Evil…

After the horrible disappointment that was Alice In Wonderland, we were determined that never again would hype affect our anticipation of a film. Though its pretty impossible to avoid the hundreds of stars thrown in Kick-Ass‘s direction, we tried our very hardest to come to it with an open mind. And we’re glad we did.

Though billed as the biggest comedy of 2010, Kick-Ass isn’t by any means a barrel of laughs. It’s funny, don’t get us wrong, but if you were expecting a Super-Bad esque romp through the trials of geek-dom, think again. Though this may leave comedy-mongers among you a little disappointed, its a much richer film for it. It means the focus is on an engrossing story, interesting characters and thrilling, pacy construction.

Dave Lizewski is your average teen, dreaming away his youth by reading comic books with his friends and lusting hopelessly after the local hottie. One day however, everything changes for Dave. He decides to don a wet-suit (thanks e-bay) and become Kick-Ass; a superhero with no super powers. Fighting crime armed only with a couple of baseball bats, Kick-Ass becomes an internet phenomenon, and Dave finally feels like he’s doing something worthwhile. Even if it does mean he gets beaten up. A lot. However, Kick-Ass soon becomes involved in a crime far above his station, and once he meets real-deal avengers Big Daddy and his daughter Hit Girl (who are, as it happens, absolutely mental), Kick-Ass begins to wonder if he’s cut out for a world of defending the weak.

If it sounds more serious than you thought, it is. As a film, Kick-Ass much more Kill Bill than Knocked Up. But the glorious thing about it is that it’s also very funny. Nicholas Cage and Chloe Moretz absolutely steal the show as the darkly wonderful Big Daddy and Hit Girl, Moretz in particular is stunning as the foul mouthed, horribly talented young assassin. Considering the violence of the scenes throughout, and what 11 year old Hit-Girl has to do in them, massive praise has to go to director Matthew Vaughn for navigating us through potential disaster and into cinematic gold. It’s gory, it’s brilliant, it’s definitely not for the faint of heart.

Kick-Ass is a film for those who love their humour dark and their fight scenes brutal, with a plot that holds you until the final moments. It may not be a comedy that leaves your stomach hurting, but it will make you see that we deserve more than that.

Previous: ID4 back for more?
Next: Martyrs