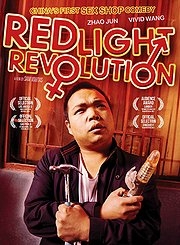 Poor Shunzi (Zhao Jun). All he did was express displeasure with some pay discrepancies, but that mean old cab company bloody went and fired him! Still, at least his wife understood – Ooohp! No she didn’t! She threw his TV at him and kicked him out of the house. Reduced to working in a supermarket in a bizarrely sensual outfit, he bumps into a suspiciously flash old school pal who drops some not-so-subtle hints about China’s boom-booming sex shop industry.

His interest piqued, Shunzi hooks up with a ditzy assistant (Vivid Wang, and I’m not even joking) and opens his own sex shop. But how will he cope when he has to deal with disapproving parents, a psychotic gangster supplier and a neighbourhood watch hellbent on shutting him down? With an army of locals, who’ve found themselves liberated and united by the sudden ability to buy condoms and such at any hour they bloody please, he just might pull it off..

This film shouldn’t exist. It practically doesn’t. Because China’s very first Sex Industry Comedy has been shown the door.. by China. In a quite beautiful case of ‘La la la nope not listening’, the country with the largest and fastest growing domestic sex toy industry (over 2000 sex shops in Beijing alone), not to mention the stuff they send overseas (over 10,000 sex toy companies producing 1.3 trillion condoms per year), has banned the first film that dares to actually talk about it. So really, this film earns a cacophonous round of applause just for having the balls to exist. It’s a shame, then, that as a film it’s only kind of alright. Stylistically an interesting blend of British kitchen sink drama grit and the visually striking work of Anh Hung Tran, Red Light Revolution contains flashes of genuine gut-busting humour, from snappy put-downs (‘What’s his job, janitor?’ ‘I’m a professional thespian.’ ‘He’s got a totally forgettable face.’) to visual schtick (a repeated use of a ‘This Shot has been Deleted’ title card which gets funnier with every appearance). It’s also a film that clearly understands the conventions of the genre, and plays up to them for some of its funniest gags. After Shunzi asks his comically brutal wife if she’s leaving for any reason other than his unemployment, we immediately cut to the two of them sitting in the living room, next to an incredibly embarrassed younger man. Later on, after his excessively helpful ‘There Must Be Something Wrong With That Guy’ Supplier has got him set up at the shop, he switches into evil gangster mode before even finishing his sentence.

But, alas, these moments are few and far between; I just listed about half of them. The majority of the script is clunky, overly formulaic and hopelessly unfunny. Too much of the dialogue feels like a first draft, smacking of ‘Just get anything down, we’ll put a funny bit in later.’ The performances aren’t terrible, but they’re too frequently melodramatic while delivering lines that don’t call for it, and our leads are too willfully stupid to secure any kind of palpable sympathy. As a form of dirty protest, Red Light Revolution should be applauded. But it’s destined to occupy more column inches than DVD shelves.

Previous: The Descendants
Next: Razzies to be awarded on April Fools’ Day