Razzies to be awarded on April Fools’ Day 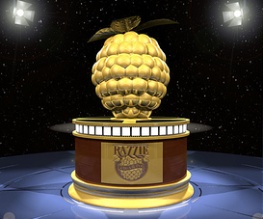 In a startling (ish) break from tradition, the 2012 Golden Raspberry Awards – the tongue-in-cheek cinema ‘prizes’ which celebrate the very worst of Hollywood – are not to be awarded the day before their sober nemeses the Academy Awards.

The Razzies ceremony is usually held on ‘Oscar Eve’, allegedly to capitalise on the fact that the world’s press is wandering around Hollywood with nothing to do until the following day. However, the 32nd Golden Raspberry Awards will be awarded on April 1st this year in order to give voters more time “to see the drek they will eventually nominate” as well as emphasise the humorous nature of the prizes.

Oscar-hungry press will still be catered to, since the Razzie nominations will be announced on 25 February – which is, of course, Oscar Eve.

The nominations for this year’s Academy Awards (the 84th such clutch of little gold statues, apparently) will be announced at 13:30 today; make sure you check back here for the full story!

Who do you think deserves a Razzie this year? Apart from Adam Sandler, that’s too obvious.