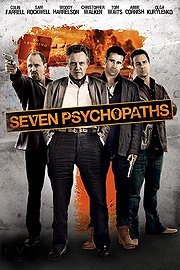 There’s a strange alchemy to Seven Psychopaths. On paper it shouldn’t really work (although maybe that’s the point). It’s relatively plotless, more a slapdash series of events bound together by the characters involved, fixed in place by the repeated themes of death, vengeance, loss and love. But somehow, onscreen, featuring top class performances from Sam Rockwell, Christopher Walken, Colin Farrell and Woody Harrelson, and with a script that is packed to the rafters with humour and life, Seven Psychopaths works. Though lacking the taut, elegant structure of In Bruges, McDonagh’s second directorial feature – against all the odds – feels like a complete thought, coming together in a blaze of glorious, heartfelt mania.

Marty (Colin Farrell) is a screenwriter with a problem. He’s got a title for his next film – Seven Psychopaths – but, with a deadline looming, is yet to establish the plot. On top of that, he’s got a dependency on drink and a girlfriend (Abbie Cornish) on the verge of ditching him. Elsewhere, Marty’s best pal Billy (Sam Rockwell) is trying to make it as an actor and in the meantime stealing dogs and returning them to their owners for the reward with the help of a placid, old-fashioned gent named Hans (Christopher Walken). Into the lives of these three men careens the ruthless Charlie Costello (Woody Harrelson), a violent mobster who loses his shit (or to be more specific, his Shih Tzu) when his beloved dog Bonny is snatched by Billy. With Costello on their tail, the trio are forced to go on the run. All the while, Marty is trying desperately to gain inspiration for his film and discovering – as time goes along – that all the best stories are, much like Charlie’s beloved Bonny, stolen. 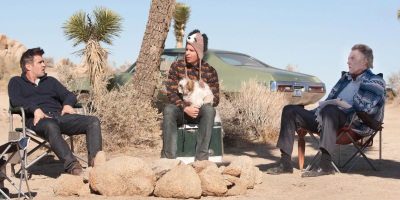 Essentially, Seven Psychopaths is all about the script; a film that delights in speech and all the surprising ways in which people communicate with one another. From start to finish, McDonagh’s script crackles with wit, humour and a deeply rooted poignancy. Infectiously vibrant, pitch black, foul-mouthed and funny throughout, comparisons to Tarantino or Andrew Dominik are inevitable, but the real beauty of McDonagh’s dialogue is that it is highly distinctive; with In Bruges and now Seven Psychopaths McDonagh has managed to carve out his own brand of dark, frothy humour that distinguishes itself from the work of his contemporaries.

With such a script to work from, the best parts of McDonagh’s film centre on the back-and-forths between the magnetic central trio of Rockwell, Farrell and Walken. Farrell as Marty is solidly likable but flawed, the voice of reason amidst the chaos, the observer to these increasingly mad events. But despite being the centre of the film Farrell holds back, allowing those around him to exert their chaotic potential. Working against the frenetic energy of the film is Walken’s soft, sweet, heartfelt performance as Hans, the most nuanced we’ve seen him in years. But the real star of the show is Rockwell as the unhinged but well-meaning Billy. His full-hearted, misty-eyed turn is at once tragic and comic, inspiring sympathy from the word go (there also can’t be many actors who could establish so much chemistry with a Shih Tzu). 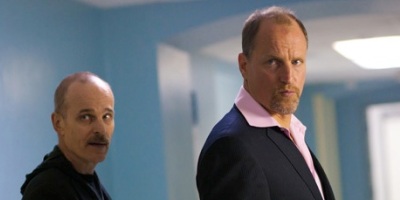 If there’s a flaw in Seven Psychopaths it’s McDonagh’s occasional dependence upon making excuses for his film by deliberately flagging up its own flaws. At one point Hans, having read a portion of Marty’s script, calls him out on his treatment of the female characters – either blank ciphers or victims of violent crime who come to a sticky end rather too quickly – thereby drawing attention to McDonagh’s own uninspired female creations: Marty’s dull girlfriend Kaya (Abbie Cornish) and Billy’s briefly glimpsed mistress Angela (Olga Kurylenko). There’s a certain smugness about making excuses for this through the device of the script but, then again, Seven Psychopaths is all about getting things wrong. It’s a film in which McDonagh investigates his own doubts and fears about the creative process; a film about trying to create the perfect story and failing, starting over and trying the new. It’s imperfect – just like all its characters, who find themselves stumbling over words, contradicting themselves and, time and again, behaving badly – and that, somehow, is its glorious, shambolic appeal. 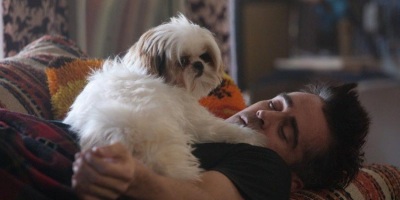 It’s been a long time since we’ve seen a coming together of actors on their A-game with a script that sparkles with this much humour and heart. And despite its shortcomings, there’s a rambling, magical energy to Seven Psychopaths that sticks up a middle finger at the deadened, boring norms of modern cinema. Martin McDonagh, we salute you.