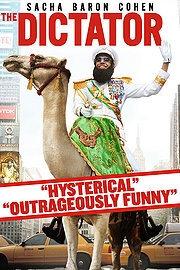 There is just something about Sacha Baron Cohen. A certain quality that makes it very hard to watch him on screen and not find yourself charmed (even if, at that moment, he happens to be “milking” a young woman over a bucket). At one point during The Dictator when he is momentarily clean-shaven, smartly dressed and not pulling a funny face, I was suddenly reminded that he is in fact rather a handsome chap. So quite why he wants to perpetually disguise himself as an absurd caricature is rather mystifying and could probably be the subject of some lengthy psychoanalytic paper. All pop-psychologising aside, though, Baron Cohen’s charisma and effortless aura of good humour are what truly carry this film. Admiral General Aladeen (Baron Cohen) is the world’s happiest dictator, presiding over the North African nation of Wadiya and spending his days sleeping with American celebrities and blithely ordering the executions of anyone who insults his intelligence/gets the cereal toy in their bowl instead of him. But Aladeen finds his world turned upside down when he is is betrayed by his jealous brother Tamir (Ben Kingsley) whilst visting the US. Managing to escape from the clutches of a would-be assassin (an amusing turn from John C. Reilly), Aladeen takes to the streets of New York, stripped of his formidable beard and expensive robes, and is taken in by the feminist, wholefood-store-owning Zoey (Faris). Before long he is an employee of the store, implementing his distinctive managerial techniques and naming himself “Supreme Grocer”, whilst also hatching a plan to claim back his title. As you might have guessed, the plot isn’t so much important as by-the-by, a loosely adhered to series of events which enable the hilariously crude setpieces – Aladeen and Zoey romantically joining hands inside the birth canal of a woman in labour springs to mind most readily. And the laughs certainly come early on – starting with a dedication to Kim Jong-Il – continuing right up to the “what happened next” snapshots as the credits roll. It’s not all rollicking good fun, admittedly. Certain moments elicited an almost uncomfortable silence from the audience not because they were offensive, but largely because they were unfunny, needless tangents. Somehow, when the likable Aladeen makes an off-topic stupid joke it’s OK. But when it’s a sideline character, such as immoral oil tycoon Mr Lao (Bobby Lee) ridiculing his non-English-speaking wife, the effect is pointless and a little mean.

Elsewhere though, Anna Faris throws herself into the performance with gusto, readily poking fun at herself – and at the modern preoccupation with the uber-PC, ultra-leftie lifestyle – and gamely parading her unshaved armpits for laughs. Really, Faris’s performance, alongside Baron Cohen’s audaciously shameless and utterly lovable turn, reflects the feel of this film – it’s big and broad and takes almost nothing seriously. There’s no real cruelty to be found here and, although it’s not exactly a world-changing satire, it’s commendable that Baron Cohen and Charles have attempted to make a film that says something important, even if it is wrapped up in layer upon layer of penis jokes. A little hackneyed though it may be, Aladeen’s final speech to the watching world – in which he unwittingly draws achingly accurate comparisons between the United States’s supposed “democracy” and the dictatorship rule of Wadiya – is a moment that will stay with you after the credits roll. Will The Dictator do much to change things? No. Will Sacha Baron Cohen ever give up acting to become a political crusader? It seems unlikely (he wouldn’t be able to wear a fake beard, for starters). But for a film that is so inherently silly, The Dictator does make you think about the state of modern politics, and in a far more entertaining way than watching the evening news. Who knows, perhaps this is the future of political education.

Previous: Comes a Bright Day
Next: Anchorman: The Legend Continues teaser is leaked