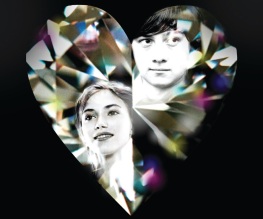 Aspiring businessman Sam (Roberts) has got big dreams – he fancies himself as an ‘entertainment fixer’ and has long planned to open a restaurant with his friend Elliott (Anthony Welsh), but for now he’s stuck as a bellboy at the Mandarin Oriental. The tyrannical concierge Mr Morgan (Geoff Bell) sends Sam on an errand to have a watch altered for a guest, but Sam stops off to grab dinner at the cafe where Elliott works. He ends up in a terribly English tussle for the last risotto with Mary (Poots), a friend of Elliott’s who compliments Sam on his watch (or, rather, the guest’s watch that he’s decided to pop on) and invites him to visit Clara, the vintage jewellery shop where she works.

Needless to say, Clara is exactly where Sam’s headed. He arrives and does his best to pretend that he’s a well-heeled browser, but cantankerous proprietor Charlie (Spall) isn’t buying it and neither is Mary. Fortunately (after a fashion), the pressure is taken off Sam when two gentlemen in masks enter the shop, shoot another customer dead and barricade themselves inside. Cameron (McKidd) and Clegg (Josef Altin) have come for the Stahl Papillon, a priceless butterfly brooch in Charlie’s possession, and they don’t seem to care how many people they need to shoot to get to it. The shutters are down and there’s no way out – Charlie, Mary and Sam are trapped together with nothing but the whim of a psychotic robber standing between them and the prospect of having their brains sprayed across the earring display. It’s not the ideal place to attempt a seduction, but for Sam this really hasn’t been an ideal day… Here’s the thing. Comes a Bright Day is an enormously funny film. It’s frequently a very touching film. Once in a while, it’s a reasonably thrilling film. But it can’t quite manage to be all three at once. One suspects that Simon Aboud has tried a little too hard to be all things to all people with this, his first feature, but it’s hard to dislike him for it – I just wanted to step behind the camera and tell the poor fellow to calm down. He will most certainly have other films in which to explore the genres he didn’t manage to do justice to this time round, since more or less every single scene in Comes a Bright Day is a thing of surpassing beauty. The limited environment of Charlie’s shop is well used, with one robber dominating the front of the shop and the other the back room. Charlie, Mary and Sam spend almost the entire second act sitting in one of two cramped corners, intensifying their well-honed dialogue beautifully.

However competent his writing and however good his eye for a striking shot, Aboud was very lucky in his cast. Craig Roberts is earnest, nervous and very slightly uncomfortable as wannabe hustler Sam, and Timothy Spall’s gravelly tones and patrician attitude are warming and worryingly sexy. Surely I shouldn’t be fancying Timothy Spall at my time of life? I’ve seen other reviews claim that Imogen Poots (28 Days Later) is the true star of the show, but although her glacial performance is certainly striking it’s Charlie who really holds things together, forging more believable relationships with both Sam and Mary than they really manage with each other. The supporting cast is adequate but doesn’t have enough time to shine, although Kevin McKidd’s gloriously deranged Cameron is a joy to watch. “I AM GOING TO COME AND SHOOT SOMEBODY!”, Cameron booms cheerfully from the back room of the shop after discovering Charlie’s been fibbing to him about something or other, and his jolly intensity is more frightening than the snarl of even the most heavily scarred Hollywood hit-man. Make no mistake, Comes a Bright Day is a good film – well cast, well written, well shot and genuinely entertaining. Give Simon Aboud a few years to get himself in check and he’ll probably be making great films; and then you’ll be able to produce your DVD of that interesting film he made with Craig Roberts back in 2012, and talk authoritatively about how you preferred Aboud (you’ll be calling him ‘Aboud’ by then, trust) before he got all polished and perfect. It’ll probably be a more sure-fire pulling technique than producing a diamond brooch… and trust us, you can’t afford Timothy Spall’s prices.