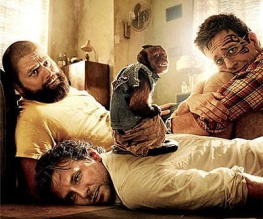 Given the phenomenal success of The Hangover, it was only a matter of time before a join-the-dots sequel was wheeled into the sunlight with its cracked and oozing maw agape and waiting to swallow your money. Well, here we all are again – two years on from the trip to Vegas which nobody will ever really be able to forget, Todd Phillips’ gross-out train is heading at full speed towards another box office smash. The only trouble is – and stop me if I sound like too much of a square here, won’t you? – it’s all a bit boring.

It’s two years since the events of The Hangover, in which mismatched groomsmen Phil (Cooper), Stu (Helms) and Alan (Galifianakis) manage to lose their friend Doug (Bartha) after a raucous Vegas bachelor party which none of them can remember. Flash forward to the present day and it’s Stu’s turn to get hitched – except he’s taking no chances with his wedding to Thai bride (not like that) Lauren (Jamie Chung). His stag do consists of a pancake breakfast before the wedding party leaves for Thailand, and Stu is determined that even with Doug’s socially stunted brother-in-law Alan tagging along once again, nothing will be allowed to go wrong.

Naturally, nothing is exactly what doesn’t go wrong. The next morning, Phil, Stu and Alan awake in a seedy Bangkok hotel room – Doug’s safely back at the resort, but Lauren’s little brother Teddy (Mason Lee) is nowhere to be found. Very much in evidence, however, are a monkey with a denim jacket, Stu’s monstrous new facial tattoo and Alan’s shaved scalp – not to mention a collection of muzzy heads and a distinct ignorance of anything that happened to the ‘Wolfpack’ the previous night. The race is on to work out what the boys did in Vegas Bangkok and where they left Doug Teddy, so they can get back home to the resort in time for Doug’s Stu’s wedding. Also, Mr Chow is there. Also, why the fuck is there a baby monkey? Also, Mike Tyson. BLAH BLAH BLAH BLAH BLAH. The film’s setting defines almost everything about it – gangsters, fighting monks, ladyboys and human ping-pong ball dispensers all abound in a squint-and-it’s-not-racist whistlestop tour of, as Alan grandly puts it, “the Asiatic peoples”. Having said that, Phillips and co do make the most of the huge variety of locations at their disposal; the boys stagger from back-alley brothel to high-rise hotel via monasteries, street cafés and bustling markets, with otherwise gratuitous trips in cycle rickshaws and punts thrown in to cement the admittedly well constructed sense of disorientation which pervades their adventure. Cooper and Helms return to their roles with gusto, although Galifianakis’ expanded part just gives him more opportunities to stick in your teeth – however, he’s diluted by a number of well-timed cameos including appearances from Nick Cassavetes and Paul Giamatti. Farewell, Mel Gibson, we hardly knew ye…

If you really enjoyed The Hangover and have suffered amnesia since 2009, you are going to bloody love The Hangover: Part II; the two films are, to all intents and purposes, identical. The sequel’s main advantage is that the lead characters were all nicely defined in the previous film, so there’s no need to spend any time setting up the situation – everyone’s exactly as you remember them, and everything’s going to unfold exactly as you expect it to. That’s fine if it’s what you want – everyone likes to switch off occasionally, and The Hangover series was evidently written for a target audience languishing in a PVS – but even after two films the format is getting tired. Go if you want, laugh at the obligatory revolting photographs during the credits and wince when a whole pig gets smashed up by a Toyota Corolla, but don’t buy the DVD. Please don’t buy the DVD. If you do, I suspect there’ll be a threequel – and a third outing for this already sickly-looking horse can only end in corpse-flogging.

Previous: Psalm 21
Next: Short Film of the Week: One Word