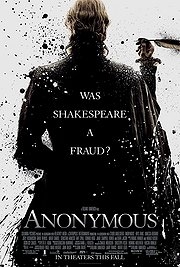 There’s been a bit of a hoo-ha over Roland Emmerich’s latest, Anonymous, a film expounding the notion that the Bard didn’t write his plays. What the anti-Anonymous crowd don’t seem to grasp, however, is that this is a ROLAND EMMERICH film. Roland Emmerich of lame apocadrama 2012 fame. If we were supposed to take his films seriously, we’d all be down at the supermarket right now, stocking up on baked beans and inflatable life rafts. Admittedly, Emmerich has recently been going on about the legitimacy of the theory, but at the end of ye olde day, the central hypothesis of Anonymous doesn’t stand up to much scrutiny. It’s just kind of stupid. The film’s central character is Rhys Ifans’ Edward de Vere, Earl of Oxford (the younger incarnation played by an extremely pouty Jamie Campbell Bower). Edward has always wanted to be a writer but his family are all, “No Edward! Do you want to work in Starbucks for the rest of your life?”. Thus, Edward has to pursue his writing in private. After discovering that the high-ranking Cecil family are plotting to place James VI on the throne after Elizabeth I’s death (‘He’s Scottish? Ew!’ – everyone in this film), Edward hatches a plan to begin staging his plays anonymously. To be honest, it’s not the best of plans, but at its heart is a rather romantic concept: that the pen is indeed mightier than the sword. Edward hopes, in other words, that his work will inspire the great unwashed masses to revolt against the Cecils.

Initially hiring Ben Jonson (Armesto) to masquerade as the author of his plays, Edward is horrified when loutish actor Will Shakespeare (Spall) comes out on stage after the first performance of Henry V to take the glory. Edward reluctantly accepts Shakespeare as his substitute and, as the political unrest surrounding Elizabeth’s succession issue grows, the audience is taken back and forth in time to illustrate Edward’s illicit relationship with the young Queen (Joely Richardson) and how this has affected his life and works. The thing is, it’s all a bit wishy-washy. Edward sets out wanting to use his plays to unseat his enemies but – aside from casting a William Cecil-alike to play the murdered Polonius in Hamlet, and giving Richard III a hunchback like Robert Cecil’s – the film doesn’t really explore the notion that Shakespeare’s (or Edward’s, whatever) works were explicitly politically motivated. Add to that the convoluted ties between Edward, Elizabeth and her several bastard children (so much for this ‘Virgin Queen’ business), and you are left with a story that is a bit of a mess.

And, for a cast including RSC regulars Derek Jacobi and Mark Rylance, the performances are for the most part incredibly over the top. Indeed, it’s a surprise that Emmerich had any of his lavish Tudor sets left to work with, seeing how much scenery-chewing there is going on. Rhys Ifans manages to escape with his dignity and Rafe Spall’s silly turn is winning in its own way, but it is Vanessa Redgrave who really shines in this cast. In fact, it’s a shame that her performance is confined to a film in which she is not the focus, because her portrayal of the dying queen, riddled with regrets and beginning to lose her marbles, is touching, delicate and thoroughly convincing. Despite its flaws, Anonymous is still enjoyable because it is essentially a decadent period romp, complete with bodices, incest and spectacular sets (the productions at the old Globe Theatre being particularly good fun). But as a film which attempts to seriously debate the issue of Shakespearean authorship it’s rather a lame duck. It wouldn’t have mattered if it succeeded in its aims anyway. The Bard is still rolling in his grave from Joseph Fiennes’ performance in Shakespeare In Love.