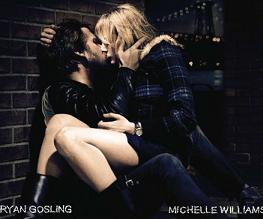 Dean (Ryan Gosling) is a young romantic who, despite coming from a broken home, won’t let experience blight his quest for true love. Making a modest – but honest – wage working for a removals company in New York, it’s his belief that men are the more romantic sex. Women, he says, spend their lives waiting for Prince Charming, only to later marry the most secure option. That’s not for Dean. He’s looking for a partner who really strikes him – one he’d “be a fool not to marry”.

Enter Cindy. Played by Michelle Williams, Cindy is a young medical student full of aspiration. Though romantically involved with a college wrestler, she one day hopes to find the kind of love that her arguing parents and jaded grandmother would tell her only exists in fairy-tales.

On the surface, then, Blue Valentine has all the makings of a romantic comedy – one where the good natured labourer meets the hard-working student and they learn what it is to truly love. But with these character backgrounds actually being introduced midway through the narrative, after we’ve seen where things end up, it’s safe to say that’s not the case. No, Cianfrance’s film is definitely not just another romance – though you might end up wishing it was.

With events skipping back and forth between the past and present, our actual point of entry is around six years down the line, when Dean, now balding and a borderline alcoholic, makes his money painting houses and spends the rest of his time looking after his young daughter. Cindy, now Dean’s wife, has become a nurse and despairs for her husband’s lost potential, scarcely able to abide his presence, let alone his touch.

With Dean insisting that he is happy enough with his role as a husband and father, differences in outlook and breakdowns in communication are all too frequent. With tearful arguments being spurred by such incidents as the loss of a family dog (“How many times did I tell you to lock that f*cking gate?” Dean snarls) and Cindy’s chance encounter with her past partner (“He’s fat now,” she lies. “Why should I care?” Dean angrily retorts), the couple’s attempts to reconnect in the “Future Room” of a sleazy motel are almost as ironic as they are painful.

How did things get so bad? Well, that’s just the problem – nobody seems to know and the film doesn’t plan on telling us. Whether you choose to see this as a master-stroke or simply a matter of frustration is likely to depend on personal opinion. With the unplanned conception of the couple’s daughter occurring very early in their relationship, perhaps they over-romantacised and took things too fast? Or maybe the situation could have been avoided given a different approach to the years that followed? Our lack of knowledge about this central period of the relationship restricts us from approaching either judgement with any real confidence.

The only real conclusion we’re left with is that, well, sometimes relationships don’t work out. It’s a bit like the anti-Knocked Up, or a bleak re-telling of Gosling’s own turn in The Notebook. The story may be tragic, it may even be a truthful reflection of many people’s lives, but that realism can be seen as a hindrance as well as an art. The film’s convincing performances secure it a 3 star rating, but whilst Blue Valentine is a raw and unflinching portrayal of the start and end of a relationship, it’s difficult to escape the feeling that there’d be more value in knowing what happened in the middle.