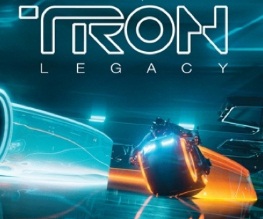 Poor old spectacular CGI effects. Back in the day, we used to gawk, foam, burble and aggressively wee over the latest in computer technology, but it seems that as time goes on, we’re becoming more and more suspicious of its whizz-pop charms. “INTERNET!” we once cried. “WIFI!” we screeched, “APPLE PACKAGING!” we moaned as if in some sleek, globally-connected i-orgy. Pixar was revolutionising kids films, Peter Jackson was caning us all across our backs with whips made of digitally enhanced beards – cinema was bloody exciting . And then, all of a sudden, 3D came along. And we collectively slammed on our brakes. No, we said. We’re done here, you story-mangling, money-retching monster. And there’s a possibility we need to chill out a bit.

Tron: Legacy picks up 20 years after Tron left off – the computer development company Encom is booming, technology is advancing and it seems money is being made left, right and centre by thin men in mean suits. But where is the whizz-kid behind Encom’s success – Kevin Flynn? It soon transpires that developer Kev disappeared mysteriously some years ago, leaving his family and colleagues to run the business. But his son Sam ain’t never gonna be no suit, dammit, and spends most of his time being ruggedly resentful of his father’s abandonment, riding on motorbikes and changing his shirt. But, when a mysterious page calls Sam to his dad’s old arcade, he discovers a secret computer programme that might hold the secret to Kevin Flynn’s disappearance and – before any of us know it – he’s sucked into the virtual world of the MCP (Master Control Program). In this computerised world, an evil Kevin Doppelgänger reigns supreme and its up to Sam to find his dad, find a girl, get his dad, get the girl, win some fights, wear some lights and try not too look too incredulously at a CGI Jeff Bridges digitised to look like a younger version of himself. First things first, Tron Legacy is gorgeous. Dropping us into 3D only when we enter the Tron universe, we feel genuinely transported as an entirely different, digitised world unfolds around us. The action is exciting; the lightcycle battle (only one, sadly) is utterly, hopelessly satisfying and all in all, those who ached for a proper look at Flynn’s created universe surely cannot complain. It’s Tron as it was meant to be and in my opinion, considering the first film’s central objective was to push what was possible in terms of computer generated film, its entirely justifiable that its sequel has the same goal. Yes the story is barmy. Yes, if you think too hard about any of the “logic” spouted by the characters there’s a very good chance your brain will eat itself out of rage and panic. And yes, “other Kevin” looks a bit weird. But heck, Jeff Bridges is still marvellous, Garrett Hedlund is perfectly passable as hunky Sam and Olivia Wilde is smokily gorgeously S+M-tastic as The Girl Who Gets Got. We watch them wear stretchy pants on a variety of tongue-meltingly cool machines as they SAVE THE MOTHERF*CKING WORLD. To a great soundtrack. What exactly is everyone’s problem? Tron: Legacy, as far as I can make out, has been made as a testament to how far film-making has come in the last 20 years. 20 years! Do you have any idea how few years that is? If you’re a fruit fly then I apologise for twisting the knife, but honestly, its really not many years. Well done everyone. Well done indeed. The only question I feel needs asking is why, why they felt they needed to mess up all their lovely, shiny, pointy work with a dodgy CGI Jeff Bridges? We’re not there yet, guys. Sorry, but we’re not. Still, give it another 20 years and you can have another go, eh?

Previous: Win SEX AND THE CITY 2 goodies!
Next: Blue Valentine