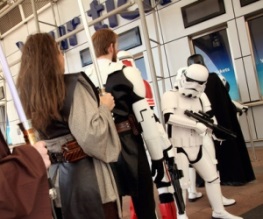 In the wake of the exciting nearly-news that JJ Abrams is looking for a Wookiee, the constantly churning Internet rumour mill has turned up some more potential Star Wars casting notes.

@UKopencall, an incredibly badly managed Twitter account that summons Britain’s legions of hopeful actors to auditions across the country, has put out the call for “lead actors for a Disney film” – specifically, a “beautiful, smart, athletic” orphan called Rachel and a “handsome, smart athletic” fatherless twerp called Thomas. We sincerely hope those names are a cover story.

For the full casting brief, click the snippet below:

We know Abrams is trying not to get too bogged down in the intricacies of the Star Wars Expanded Universe, so these may well be completely new characters. The fact that Rachel’s an orphan and Thomas grew up without a father more or less rules out a new generation of the families from the original trilogy – Han and Leia’s kids Jacen, Jaina and Anakin all come from a pretty stable home, while Luke’s son Ben (with former Emperor’s Hand Mara Jade) is anything but fatherless.

There’s been no further news on this summer’s rumours that either Ryan Gosling or Zac Efron could be lining up to play Skywalker Jr, although it’s a possibility – our money is on at least one of these roles being a student at the Jedi Praxeum, the New Republic’s Yavin IV equivalent of the Jedi Academy on Coruscant. Thomas goes on a mission with Ben and finds Rachel (who’s obviously going to be Force-sensitive) scraping out an existence in the slums of Corellia or Tatooine? Sounds plausible to us.

Will you be auditioning for Star Wars: Episode VII? Do you think this story blurred the lines between reporting and fanboy speculation? So do we. Oops.