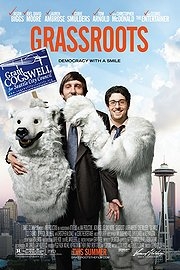 Some ideas are best fulfilled with a bit of distance from their subject. In the realm of true-life politics adapted for film, it’s hard to assess when certain topics are appropriate, relevant, or out-of-date. Calls of ‘too soon’ met with recent biopics of George W Bush (W.) and Margaret Thatcher (The Iron Lady). Bush was still in office when W. was released, and the whole project seemed a bit ahead of itself. Legacy is an oft-repeated word where US Presidents are concerned, and while it might be a foregone conclusion for some, Oliver Stone‘s foray into the life of the much-maligned commander-in-chief had no idea of knowing how history will judge the man. The Iron Lady was dismissed by some on the grounds that such a forthright portrait of Thatcher’s growing dementia in her later years was disrespectful, her still being very much alive the main point of contention. What unfortunately takes the wind quite wholly out of Grassroots‘ sails is a feeling of ‘too late.’

Grassroots is based on Zioncheck for President, Phil Campbell’s (here played by Jason Biggs) account of the 2001 Seattle City Council elections. The contest saw activist Grant Cogswell (Joel David Moore) mount a campaign against long-time incumbent Richard McIver (Cedric the Entertainer). Unemployed and unhappy with Seattle’s growing traffic congestion and pollution, Cogswell enlists his recently-fired friend Campbell as his campaign manager in a bid to expand the city’s monorail and shake up a staid and stuffy system.

It’s not a story many people will be familiar with, but there’s a feeling of déjà vu that permeates the constant imagery of a young populace being galvanized in the name of political change. It happened four years ago, but Barack Obama’s 2008 campaign and the untold wave of support extended by America’s young and restless casts a long shadow over the go-getting pluck of Grassroots before it even gets into gear. As widespread voter apathy was challenged by a campaign that shrewdly got to grips with the era of social media, a generation of young adults embraced the idea that they could actually play a part in shaping the future. There were people who saw Obama as a chant and a T-shirt, but most were savvy enough to appropriate Spider-Man‘s power/responsibility mantra and intelligently explain their decision to back him. 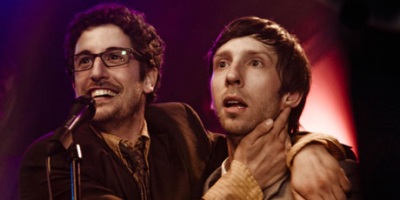 Taking place in 2001, the kind of ‘fuck yeah, politics!’ enthusiasm doled out by Grassroots‘ young voters is embarrassing, reminiscent of a kind of baby boomer enlightenment usually remembered with a healthy roll of the eyes. Gyllenhaal can’t muster much else but unbridled zeal for Cogswell’s campaign and the baseless energy it inspires. To that end, Cogswell’s actual policy beyond an idealistic passion for Seattle’s monorail is left unclear. It’s buried under soap-box rhetoric that his baying fans inconceivably recognize as powerful oratory. The closer he gets to unseating McIver, the more Grassroots‘ investment in youthful fervour seems misplaced. Cogswell’s entire character is cobbled together by a few speeches peppered with the kind of jarringly ebullient paroxysms of language that are best confined to music blogs.

As Cogswell, Joel David Moore’s performance relates an incessantly whiny brat whose decision to run for a Council seat is more a bizarre stunt than a genuine effort to change the system. Jason Biggs dusts off the old American Pie charm and convincingly defines Campbell as a friend whose involvement is inspired by an unemployed listlessness more than any real belief in Seattle’s needs or Cogswell’s self-righteous anger. Indeed, Campbell manages to get in a bit of wistful self-pity about how much he wishes he had stayed in Memphis. The real-life Cogswell supposedly renounced his life-long attachment to Seattle and moved to Mexico City in 2006. 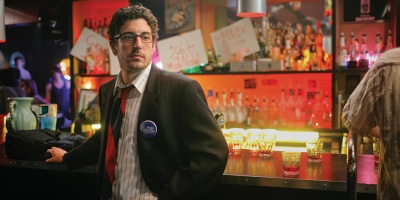 There’s a sad beauty in Gyllenhaal’s tour through the city. Its permanently overcast skies and distant mountains give Seattle an air of soggy oppression that at least provides an acceptable backdrop for its young population’s disillusionment. Grassroots feels appropriately handmade, and the story is so small it clearly serves as a platform for a wider discussion on fighting an atrophied political system with little more than enthusiastic anger. There are a few moments of wry observation concerning inevitable moments of political expectancy and reality colliding head-on, but gradually Grassroots gets swept up in the process and a little drunk on the vivacity of youth. It might even be rather endearing if its heart wasn’t worn so proudly on its sleeve.