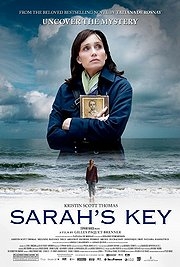 Ordered by the Nazis to reduce the Jewish population in occupied France in 1942, the French authorities went on a mass arrest; imprisoning thousands of French Jews in a Parisian velodrome under inhuman conditions. In Tatiana de Rosney’s fictional tale Sarah’s Key a 10-year-old girl named Sarah attempts to save her younger brother Michel before she is taken away; locking him in the closet and making him promise not to leave until she returns. When the prisoners are moved to concentration camps and split up, Sarah realises she must escape if she is to be in with a chance of freeing Michel. Meanwhile in the present, an American journalist named Julia Jarmond (the ever-glorious Kristin Scott-Thomas) is beginning to research a piece surrounding the inhuman events of 1940s Paris. When she and her husband inherit a small flat in the city itself, she soon finds herself woven into young Sarah’s story, unable and unwilling to free herself from it for reasons she can’t decipher.

Sarah’s Key could easily be yet another WW2 movie, lost among the brilliance of such releases as The Pianist, The Boy In The Striped Pyjamas and Schindler’s list, yet it manages to feel relevant and fresh. For a start, the Nazis are not the explicit enemy, and even though it is the French authorities that round up the Jews, even they are not the focus. The spotlight, rather, is on history; the past ebbing into the present, and how it is that those we have never known can change who we are. That being said, there are several moments that send shivers through your body, akin to looking at the piles of shoes gathered from Auschwitz victims or the miles of white headstones that mark the WWI battlefields. The unimaginable scale of the Vel’D’Hiv brought vividly to the screen, but first and foremost Sarah’s Key serves the needs of its story rather than of its emotive context – and is all the better for it. Scott Thomas is in her element as Julia, and carries the present-day section of the movie strongly. She is let down by those let’s-get-the-history-straight moments in her editor’s office and those token we’re-young-and-ignorant characters that supposedly exist in order to conveniently fill in a historically-clueless audience. Ok, those scenes may be necessary (I’d never heard the details of the Vel’ d’Hiv) but sadly the script is never quite strong enough to do away with the faint air of pragmatism.

As for the young French actress, Mélusine Mayance, her performance as the determined and intelligent Sarah is beautiful and believable. She must quickly learn about the nature of her surroundings in order to make her ruthless return journey to Paris. As she grows into an adult, haunted by her past, that heightened misery never leaves her character – and this air is something that connects her to the equally determined twenty-first century Julia.

In a way that is necessary for films that deal with tragedy, Gilles Paquet-Brenner is unafraid of bringing the brutality of the events of the Holocaust to the forefront. It risks cliché but with sensitive acting and an absorbing storyline that weaves the past and the present so successfully, Sarah’s Key is far more than just a history lesson.