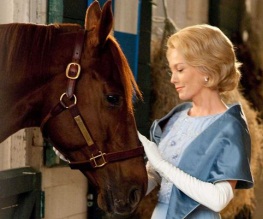 Secretariat tells the true story of the plucky Penny Chenery Tweedy (Diane Lane) and her quest to change the fortunes of her family’s stables following the death of her mother. After her father is struck down by mental illness and becomes too ill to manage the farm and its finances, Penny decides to take a gamble. Against the wishes of a disinterested husband (Dylan Walsh) and an unsupportive brother (Dylan Baker), she decides to rear a horse as a racing champion and raise the much needed capital to save the family business and preserve her fathers legacy.

In need of an experienced horse trainer and clueless of how to go about making a horse into a champion, Penny goes in search of the notorious Lucien Laurin (John Malkovich), a brash and eccentric horse trainer with an inferiority complex brought on from failures in his past. Penny and Lucien are joined by humble stablehand Eddie Sweat and Elizabeth Ham, the family’s loyal secretary, to form an unlikely but charming band of underdogs, determined to take Red (aka Secretariat) all the way to the top. In order to raise the funds they need, Red must win the the Triple Crown, a hat-trick of races never won by a single horse in US history.

Whilst the characters of Penny and Lucien are fairly likeable and engaging, it’s clear that their roles alone aren’t enough to carry the film, and as a result much has been done elsewhere to create a sense of tension that is lacking in the main plot. It’s obvious that the film-makers have worked hard to add extra grit and emotion to the story in order for it to keep momentum and translate successfully to the silver screen. A repeated idea is that maverick jockey Ronnie Turcotte (Otto Thorwarth), rode his previous horse so hard that its heart exploded; this is emphasised in most race scenes by some quite laboured breathing on Secretariats part. Though this did go some way to creating a kind of nervous suspense, I’m not sure how pleasant I found it! Did I want to witness a horse falling to the ground as its heart burst? Not really no!

That being said, the racing scenes were excellent. The deafening sounds of thundering hooves and live-sports style camera work were excellent devices to bring the race experience right home to the viewer. Freeze frames and complete breaks in sound were used to create tension and cut the atmosphere, and were in fantastic contrast to the vintage feel of the rest of the movie. Visually Secretariat was a pretty slick production, lots of beautfully shot rural sunsets and an obviously extensive 1960’s and 70’s costume department made for a good looking film. It needed to be pretty polished to make up for other more lacking aspects, such as the simplicity of the true life story that it’s based on. Sub plots regarding other racing competitors and Penny’s relationship with her daughter were also essential in padding out the film, although I didn’t always find them relevant or important enough to really satisfy my need for a bit more substance. John Malkovich and Diane Lane are definitely worth a mention for their performances in the two leading roles. They’ve done very well with their brief and deliver the somewhat mushy script with unflinching conviction. Malkovich plays the part of a socially unaware but loveable grouch very well, and Lane’s balance of passion and reserve is spot on throughout; unfortunately, however the movie lacks much in the way of character development. The relationships and attitudes in the film change very little throughout, and so we are left with no real twists and surprises to keep us hooked between the tension of the race scenes. If you have a keen interest in the romanticised version of this true story or you particularly like films about horses then you’ll find Secretariat thoroughly enjoyable, however if you don’t care much for either, you’ll probably find it vaguely uplifting if a little clichéd. The celluloid equivalent of easy listening.

Previous: It’s A Wonderful Death
Next: John Carpenter: Filmography of a horror icon 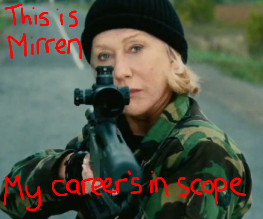