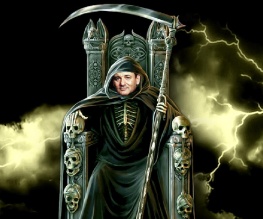 Shot in RealD, we are taken from the flat screen world of reality and gradually introduced to a 3D paradise where everyone’s wishes are fulfilled, only for them to find they wish for something different. I wished I could look sexy whilst wearing RealD glasses but it was worth being a geek for. Each 3D effect is more startling than the last and the contrast between the flat screen world and 3D paradise works as a metaphorical and emotional map for the audience, inter-cutting between the two worlds.

McConnaughy stars as a man who actually is worth more dead than alive, despite having great pecs and a winning smile. George Failey is a complete loser. His own mother couldn’t love this egocentric ass-hole! So wife, Cameron Diaz and their four children 6, 8, 10 and 12 (played by newcomers though you wouldn’t know it – they are so good at being totally obnoxious) hatch a plan to kill him off before Christmas in order to pick up on a hefty insurance policy plus access to several overseas accounts worth millions. They hire hit woman Angeline Jolie, to take him on a one way trip to paradise. Unbeknownst to them, Jolie is really childhood sweetheart Clara Goodbody who conspires with him to rid themselves of his nefarious family.

Enter Bill Murray, the Angel of Death, who is in fact overseeing everyone’s fate and decides to stretch his wings a little by letting them see what will happen if their wishes all come true.

It should be paradise but it isn’t and in an end twist they each become so utterly selfless that they each hang themselves (using a rope he has conveniently provided with a little bell attached) and they each leave the money to one of the others. But of course they don’t want it anymore. Isn’t that heart warming?

The Angel of Death then reunites them all in the three dimensional afterlife and aren’t they surprised – all except Jolie who turns out to be Mrs. Death herself. Cue the uplifting singsong.

Yes, every time a bell rings folks, an angel gets his.

You have to believe it to see it. Go see if you do.