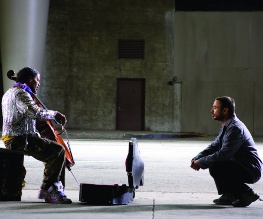 It’s hard not to be cheesy when you’re given the kind of material Pride and Prejudice director Joe Wright has been handed in this film. Based on a true story, the unlikely friendship between a gruff LA newspaper columnist and a schizophrenic former musical prodigy now living on the streets. Cue enforced movie life lesson on the redemptive power of music, the difference one person can make to the lives of the underprivileged, blah, blah, blah. And the screenplay was written by Susannah Grant, purveyor of that ultimate of cheesy cinema tales in redemption, Erin Brockovich. Uh-oh.

Given that, I think Wright does the best he can with this film, and he’s certainly got a strong cast who try their damnedest to inject some life into their subjects. Jamie Foxx, as aforementioned former Julliard student Nathaniel Ayers, whose mental illness has seen him deteriorate to the point of living on the streets, is particularly strong, inhabiting his character physically as well as emotionally. Robert Downey Jr’s disillusioned newspaper man, equally fascinated by Ayers’s passion for music when his for journalism has long faded, and frustrated that his attempts to reach out to the man are not always met with gratitude, makes a good counterpart.

The best part about this movie is that it doesn’t go down the entirely predictable route of the final scene where our poor ol’ disadvantaged hero emerges, glowing and perfect, onto the stage to thunderous applause to perform his long-awaited and no doubt spellbounding performance, with his mentor looking on tearfully from the wings. The lesson Downey’s Richard Lopez learns is not in fact that even the downtrodden have the potential for greatness given the chance, or anything else similarly bile-inducing. It’s that people are how they are, and no amount of determined coaxing can completely undo a tragic situation.

The worst part is that elements of simplistic cliche are certainly still visible, if not overpowering. Elements of the ‘true story’ have been changed to Hollywoodise it – while it was really a corporate executive who donated a cello to Ayers after he featured in Lopez’s column, the film predictably makes it a nice old lady. And Wright’s favoured technique (as seen in Pride and Prejudice and his adaptation of Ian McEwan’s Atonement) of visually overwhelming the viewer in every shot is used again here, such as in the psychedelic light show seen when Ayers gets to hear a concert at LA’s famous Disney Hall for the first time.

Overall, The Soloist is a pleasant enough two hours spent with a couple of intriguing characters who play well together onscreen. But the fact is, it’s a story we all feel we’ve heard before, and not approached in a hugely original way. While that might not take away from the powerhouse performances of both Foxx and Downey, it will make it that much easier for it to reach the half off bin at a DVD store near you sooner rather than later.

Previous: The Invention of Lying
Next: Couples Retreat