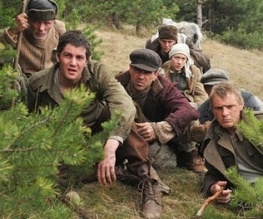 At face value, The Way Back doesn’t have a whole lot going for it. Sure, it’s directed by Peter ‘Truman Show‘ Weir, but it’s his first film since 2003 so God only knows whether he’s still any good. And it’s got Jim Sturgess in it – have we forgiven him for the frothily mental milkshake that was Heartless yet? And, sweet baby otters, it apparently stars Colin Farrell sporting a Stalin tattoo and a thick Russian accent. AND it’s about a really bloody long walk. To be quite honest, I’d planned a small post-cinema ceremony to mourn the loss of the 133 minutes I’d never get back. I may have wasted a few quid on candles, but I made it back with interest in unexpected cinematic satisfaction.

The year is 1941, and Polish army officer Janusz (Sturgess) has been interned in a Siberian gulag on false charges of espionage. He is soon seduced by the seditious mutterings of ex-actor Khabarov (Mark Strong), who claims to have an escape planned, but when it transpires that the plan is a hoax Janusz flees into the Russian winter with a mismatched gang of fellow convicts which includes taciturn American Mr Smith (Harris) and violent prison thug Valka (Farrell). Between them and free Mongolia lie snow, wolves, soldiers, locals, sun, drought and really unpleasant foot problems – and that’s before it turns out Mongolia isn’t so free after all.

As Januzs’ dwindling band of escapees trudges on across Asia, it seems as if their only hope lies in successfully negotiating the Gobi Desert and the Himalayas to reach British-run India. The film’s rather clever dedication pays tribute to three unknown men who reached Calcutta in 1942, but which three will it be? Can the gentle ministrations of Polish refugee Elena (Saoirse Ronan) help the embittered ex-cons reach a greater understanding of each other? Will there be athlete’s foot powder in India? There’s everything to play for, unless you’re the moose that Valka stabs in the face. The principal challenge of The Way Back was always going to be balancing the incomprehensibly massive scale of its ‘set’ with the characters’ gradually unfolding back stories. And by ‘characters’, let the record show that I’m only referring to the English-speaking principal cast – whilst Sturgess’ history is carefully crafted and Harris, Farrell and Ronan all had some sort of attention from the screenwriter, the four other escapees (played by two Romanians, a Swede and a German) can be fully described using just one adjective each. Those adjectives are (respectively): ‘cynical’, ‘artistic’, ‘devout’ and ‘blind’. If you really pushed me, they could be bolstered with the words ‘accountant’, ‘chef’, ‘tall’ and ‘still blind’. This is particularly unfair because there really isn’t a single shoddy performance in the core cast – even if it meant tacking another twenty minutes onto the running time, putting a bit more effort into the supporting trekkers would have been super.

Nevertheless, the characters who get a proper treatment are very well portrayed. Saoirse Ronan’s defiantly tough Elena is hugely touching, as is her relationship with Ed Harris as the grizzled Mr Smith – their parent/child substitution dynamic is anything but original, but it’s movingly rendered and skilfully tied into the overall narrative. Jim Sturgess is pleasingly grown up as the kind and guileless soldier who stumbles into the role of leader, and Colin Farrell’s career criminal Valka, by turns ferocious and obsequious, is another excellent demonstration of just how much potential remains in the former hellraiser.

Visually, the scenery cannot help but dwarf the actors, although an engaging score by longtime Weir collaborator Burkhard Dallwitz helps to humanise some scenes whilst reinforcing the starkly inhospitable nature of the terrain – which, given the absence of any nasty Russians for most of the film, essentially takes the role of antagonist. I can’t help feeling that a more even-handed treatment of the cast would have resulted in a more emotionally engaging film, but Peter Weir’s long-overdue return to the folding canvas chair is by no means a disappointment. 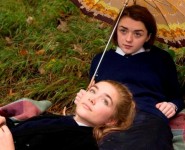