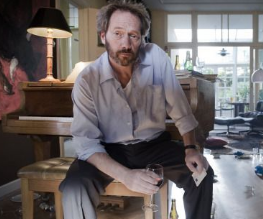 When we first meet divorced father of two Jorgen (Gijs Scholten van Asschat), it’s pretty clear that things aren’t going well for him. Caught in the middle of an endless feud between his youngest daughter Tirza (Sylvia Hoeks) and his ex-wife, he lives alone, drinks a lot and has just been informed that he’s being made redundant. The reason? He’s become “superfluous”. Jorgen’s worst fears – that he is no longer needed, no longer a vital part of the world he has created, are made all the worse by the fact that Tirza, the apple of his eye, has been ignoring his attempts at contact ever since she began her holiday in Namibia with her untrustworthy boyfriend. As he grows ever more worried about her he decides to fly out to Africa, determined to confront the man he’s sure is responsible for her disappearance.

The painfully middle-class and exceedingly white Jorgen is thrown into an entirely new, alien and largely indifferent world upon arriving in dusty Namibia and, balancing fears of being robbed and utter ignorance as to his surroundings, he begins the search for his daughter. After taking pity on a nine year old prostitute named Kaisa – offering her some money and something to eat – Jorgen finds the girl is impossible to get rid of. Strangely though, her baleful stare and silent acceptance of their situation seems to serve as a tonic to Jorgen’s constant, ceaseless self-reflection, and it is through his monologues to this unlikely companion that we begin to unravel the real history of his relationship with his family. Tirza is brilliantly constructed; flitting easily and confidently between different countries and timeframes in order to slowly reveal the dynamic of a family bound together by both love and repulsion. By keeping heavy-handed moments to a minimum and having faith in both his actors and audience, director Rudolf van den Berg creates an almost excruciating tension between his characters; where the lines between parent, child, lover and enemy seem to shift almost as the seconds go by. By drawing out this tension to an unbearable degree, van den Berg ensures that we are never quite sure whether what we’re watching is inappropriate; it’s impossible to separate the director’s intention for the film from the fears we project onto it. Caught in a gloriously horrible trap between suggestion and imagination, we cannot know where a scene will go and this uncertainty keeps your muscles tense and jaw locked for the entirety of the film’s twisty 120 minutes. That’s not something that can be said for a lot of Hollywood output. That’s not to say the film is perfect; the last third in particular seems to drag and as Jorgen searches the vast, empty deserts for Tirza we can’t help but pray it’ll all get wrapped up – one way or another – sooner rather than later. But such a powerful, confident exploration of supremely delicate subject matter is well worth the time it takes to play out, and it has to be said that the central performance by Gijs Scholten van Asschat as a man falling apart before our eyes is nothing less than astounding. Enjoyable may be the wrong word to describe Tirza, but that shouldn’t stop you from watching it. Urgent, necessary and utterly original cinema. Ready your jaw, warm up your panic muscles and go.