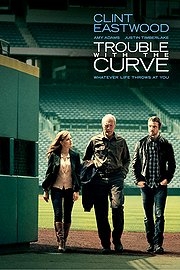 Clint Eastwood is the grizzliest guy in Hollywood. It’s been the case for a long time now, just as Nicolas Cage is the craziest, Leonardo DiCaprio is the most self-serious and Adam Sandler the most irritating. At what point does the act stop being funny, or thrilling, or engaging? It’s fair to say that Eastwood has avoided self-parody more successfully than most A-Listers who bank on their popular perception in the film industry. With the residual coolness left over from a lifetime of being cinema’s resident strong silent type, he’s carved out a hard-earned place in his twilight as a no-nonsense grump. His characters are unafraid to enlighten young punks, by playing either educator or ass-kicker. It’s usually a mixture of the two, and Trouble with the Curve is no exception.

As with Gran Torino and Million Dollar Baby, Eastwood plays a tough old son-of-a-bitch, out of touch and ostracized but still able to teach people a thing or two. He clearly relishes the role of Gus Lobel, a cigar-chomping, beer-swilling baseball scout working well into old age. It’s a role we all know well, and while not completely drained of its appeal, it doesn’t add up to much when the surrounding film can’t muster much more than a whimper to match Eastwood’s seasoned gruffness. Gus is a widower, living alone and succumbing to blindness. As a baseball talent scout, his profession (as all movie professions do) inevitably stood in the way of being a proper father to plucky attorney-daughter Mickey (Amy Adams). Joining him on a trip out of the big city and into the cosy confines of small-town America on the lookout for a hyped batsman, the pair’s rocky relationship is duly put through the process of estrangement giving way to re-connection. 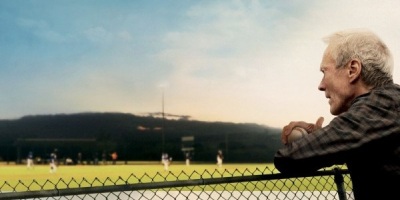 The film starts promisingly, with Eastwood talking to his penis during a morning trip to the bathroom. Entering his living room, he destroys a coffee table in a fit of elderly rage. Similar bouts of amusing dementia worked to bizarrely hilarious and endearing effect in Gran Torino, but Trouble with the Curve doesn’t possess the same righteous anger of a man battling against a world gone to shit. Instead, it’s heart-warming fare, and while Eastwood and Adams share an easy-going chemistry, their relationship isn’t one that begs for all the lengthy psychoanalysis eventually poured onto the screen. They manage to reconcile over a shared love of baseball, representing all the corny tropes of Americana along with the insufferable worship of statistics and history that comes with the sport. Trouble with the Curve dedicates enough time to both aspects to make its ultimate position unclear, with Eastwood trumping his Moneyball era colleagues with eye-rolling guff about “hearing the ball”, while Adams and a miscast Justin Timberlake trade stats and trivia on the course to true love.

If there’s one thing Trouble with the Curve is unequivocal about, it’s that the preponderance of techno-centric business is the bane of modern life. The cocky young scout snapping at Eastwood’s heels finds an analogue in Adams’ short-lived attorney boyfriend, both of them shackled to the reality of things as they appear “on paper”. Such a sentiment regarding the soul-sucking nature of corporate America isn’t misplaced, but finding an alternative in the hokum of hotdogs, line-dancing and “hearing the ball” is just as bad. Clint Eastwood might be a conservative man, but he doesn’t sit well as a decrepit poster-boy for such down-home values. Nor does Justin Timberlake, or Amy Adams. Trouble with the Curve isn’t so base as to equate everything modern with evil, but its encouragement to slow down and smell the roses creeps into the fabric of the film until a pulse is almost undetectable. 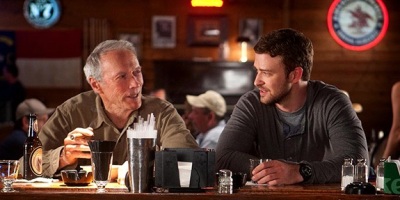 Eastwood remains the only consistently enjoyable element in a film leaden with a sepia-tinted love of the game and little else to offer. Had Trouble with the Curve found a solution for Gus’s job security that wasn’t the usual sports-movie mysticism, Eastwood’s ranting might have been put to better use. As it is, the prickliest man around is left talking the talk, but Trouble with the Curve hardly lets him walk the walk.