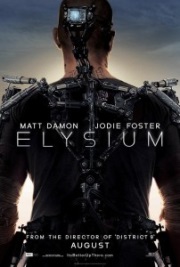 Beautifully shot, brilliantly conceptualised, Elysium is a thoughtful and exciting film… right up to the half way mark, where it discards its social commentary for stale action sequences that feel torn from the mid-90s. Elysium could have been an iconic moment in sci-fi movie history, but limps weakly across the finishing line in a confetti explosion of mediocrity.

A few bumps aside (pointless text-on-the-screen? What about a dreary childhood flashback?), Elysium catches you early on. The sight of Wall-E’s Earth but with people is hauntingly realistic, and following Matt Damon’s cruddy life makes for great cinema. Shots of the decadence of Elysium are few and far between, and it really does feel as though Heaven is just out of the grasp of those left on Earth. The film’s position on the distribution of wealth is swiftly established, and effectively transports you into the lives of the impoverished that simply become annoyances for those in wealthy countries.

The film focuses on the medical technology of Elysium – simply lay down on a table and your atoms will be reconstituted back into health – but oddly ignores all other concerns, such as food or drink. This health-table becomes a complete Deus Ex Machina by the end of film, seeing as it appears to reverse death itself within seconds. It’s stupid, it’s unnecessary, and it detracts from the message of the film.

There’s no particular moment that Elysium shoves all the good will it builds up in its first half down the toilet, but somewhere between the decent social commentary and Sharlto Copley screaming insensibly it loses its way. Matt Damon, so sympathetic in the first act, is given nothing to do in the way of drama. He resorts to trying to look as though complex machinations are at work inside his skull, but the result is that his disconnection from the events going on around him mirror our own.

The score by first-time film composer Ryan Amon is pretty terrible. Stealing shamelessly from Hans Zimmer’s patented BWOONGS, the music either fails to enhance anything going on screen or actively detracts by being pointlessly dramatic. Neill Blomkamp’s editing style is something to behold – there are just so, so many people. No shot lasts for more than 1 or 2 seconds, so that the entire film feels rushed and tense. It’s effective until it begins to get annoying. His direction of people appears to be lacking also – Matt Damon does a decent enough job when given the chance, but most of the rest of the cast, most notably Jodie Foster, just ham it up like their paychecks depend on it.

Foster is reprehensible in Elysium. Hers is a rather straightforward part – efficiency and coldness – but she plays it like a pantomime role. Aside from her character’s motivations (terrible) and lines (really, really terrible), Foster appears to be attempting some kind of accent. This seems too much for her, and the result is that her mouth never seems quite to match to what she is saying. Perhaps its some subtle homage to poorly-dubbed martial arts movies from the 70s, but I spent much of Jodie Foster’s screen time wondering whether or not she had a stroke.

The most insulting thing about Elysium is how much it squandered its potential. The designs of the robots are great, Elysium itself is beautiful, the discussion of foreign aid and immigration is well done, but all of this is forsaken to give Sharlto Copley more lines for a character that is uninteresting and completely removed from any of the issues. The real enemy of Matt Damon should have been the system itself, but instead we get generic action. As a film, it’s probably as good as Oblivion in terms of enjoyment (if not in conception), but as a Neill Blomkamp fan I can’t help feel completely let down. Considering this is only his second film, we can only hope the best is yet to come.