A Spanking in Paradise 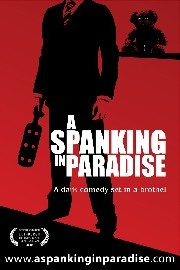 Justin (Andrew Hawley, accomplished and understated) is a Human Rights law graduate with time to kill until his American visa is approved. While visiting his estranged Uncle Rab (Simon Weir) in Edinburgh, he agrees to help out on the reception of his business, the Birds of Paradise ‘sauna’. As it becomes increasingly difficult to turn a blind eye to the antics of his new friends, Justin’s left with a tough choice to make; keep schtum, or turn in his friends and risk his visa? The restraint is what immediately separates A Spanking in Paradise from the crop of low budget British indie cinema. It’s set in a brothel, yet there’s no explicit sex. There’s some violence, but it’s all the more effective for being utterly bloodless. The language is as blue as they come (Uncle Rab’s lengthy anecdotes are particularly, and hilariously, profane), but it never jars. They’re Scottish brothel workers with criminal tendencies; of course they’ve got mouths like dockers.

Like the best British films, A Spanking in Paradise revels in the eccentricities of its location. Edinburgh is damp, dreary and houses an utterly bonkers character called Curry Tom who may as well be every idea of Scotland condensed into a man. The dialogue is slang light, but appreciates the comedy value of a well timed bit of regional dialect. Try and keep a straight face when an aging prostitute announces, to a roomful of frightened French rugby fans in little hats, ‘Ah’ll dae you, ah’ll dae you, ah’ll dae you, but ah’m no dah-in you.. (pause) Ah come own thayn, aht’ll keep meh ayartaight!’ But the film’s real secret weapon is the psychotic Leo (Leo Horsfield), whose quiet intensity makes his violent, abusive outbursts all the more shocking. As Justin essentially represents the audience, we see the brothel as he does; a bit naughty, but mostly harmless. So when Leo bluntly tells a new girl that he’s entitled to a weekly freebie, we too just want to look the other way. It’s an impressive balance, and the subtlety with which first time director and writer Wayne Thallon handles it is remarkable for a first feature.

There are, of course, a few issues here, but most can be blamed on the tiny budget. The soundtrack really needs more than one song, and the flat cinematography often prevents A Spanking in Paradise from feeling like a proper film. It ends far too suddenly, leaving many questions unanswered. Nonetheless, we should expect big things from Thallon and his talented cast; this should prove to be a great calling card.