film season, which will be exploring life, death and everything in between. This week we’re looking at the Japanese classic; Afterlife. " /> 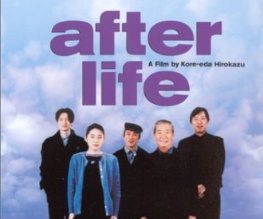 Hirokazu Koreeda’s Afterlife opens in a way-station somewhere between death and oblivion. After taking a ticket each person waits patiently to be seen by a counsellor, all of whom ask the same question – if you could take one memory with you into eternity, what would it be? Thus opens a beautiful and moving tale that not only celebrates the exquisite moments in life, but glories in our ability to constantly see them afresh. Though – as a seasoned Hollywood guzzler – it took some time for my Western impatience to reconcile itself to Japanese serenity, it’s an experience well worth the sometimes maddeningly unhurried pace.

Over two hours we follow a week in the afterlife retreat, where every entrant has just three days to choose their most precious memory. The counsellors then spend days trying their best to film an accurate representation of that memory, in order for a screening to take place on the final day of the week. Upon viewing their most treasured moment, each person disappears into the darkness with it – spending eternity re-living their happiest time, over and over again.

It’s a delicious idea, and one that is made all the more satisfying by the range of journeys we follow in this week of contemplation. Among those we meet is Gisuke Shoda, who refuses to talk about anything but all the sex he’s had over the years, Kana Yoshino; a young girl who starts her first day determined that she wants to reach oblivion with the memory of riding Splash Mountain, as well as an old woman who simply wants to re-live dancing in a beautiful red dress as a child.

As we learn more and more about these characters and the lives they have led, our focus tightens on the relationships between the new entrants and the counsellors asking the questions. When it’s revealed that those who work at the afterlife centre are the dead who couldn’t choose a memory, the story shifts from an exploration of all who pass through the station to the tales of the counsellors themselves. Is it ever too late to discover what you treasured most about you life?

Afterlife is a mesmerising spectacle, with a central concept that cannot fail to enchant you. But it has to be said that it may be a film best watched on a quiet evening with an exceedingly comfortable chair. And quite a bit of determination. The dreamy pace typical of Japanese cinema takes a little getting used to if you’re a hardened Americanised blast-puncher, and at at times – particularly around the slightly bizarre “filming the memories” mark – it seems a little as though the film has ambled happily off its path completely. However, there’s no denying the ethereal magic of the Afterlife experience, or the poignancy of the stories it unravels. You just need to be happy travelling on a scenic route, rather than looking for a shortcut.