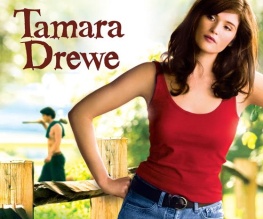 Everything about Tamara Drewe looks, frankly, bloody brilliant. Adapted from the superb graphic novel (first serialised in The Grauniad) by Posy Simmonds, and helmed by British director par excellence Stephen Frears (The Queen, Mrs Henderson Presents, every other film your mum likes), it should have been absolutely cracking. And it nearly is. Watching Tamara Drewe is like riding a motorbike that’s been nobbled so it can’t exceed forty miles an hour – there’s so much pent-up talent jostling to explode onto the screen, but a lacklustre script and predictable plot doesn’t leave the superb cast room enough to shine.

In the fictional Dorset village of Ewedown (obviously it’s real in the context of the film, or this review would have to get very postmodern very quickly), life is quiet. Downtrodden housewife Beth (Greig) runs a Writers’ Retreat on her farm and tends to the every need of her philandering bastard husband Roger (Allam), a bestselling crime writer, whilst farmhand Andy (Evans) pines for his lost graphic design business and digs up radishes. Bored schoolchildren Jody and Casey (Jessica Barden and Charlotte Christie) smoke, throw eggs at cars and fantasise about bedding rockstars, and frustrated Yank academic Glenn (Camp) can’t get anywhere with his biography of Hardy.

It seems as if nothing is going to change, ever, until village-girl-done-good Tamara Drewe breezes back in from London with a remodelled nose and some improbable hot pants. Before you can say “I hope she doesn’t get thrush”, there’s intrigue bouncing off the bushes as Nicholas and Andy both fall for the glamorous urbanite – but she’s already got a fiancé in the shape of moody rock cretin Ben Sergeant (Cooper). Will Tamara work out which man she wants in her life? Will Jody ever lose her V-plates? Will Glenn manage to shed his fear of cows? All of a sudden it’s all going down in Ewedown!

The trouble is, you don’t really care. It’s easy – very, very easy – to mistake Tamara Drewe for a really good film because of the extraordinary quality of the cast. Tamsin Greig gives her most mature and touching performance to date as a devoted wife tortured by her husband’s infidelities, Roger Allam’s sneering self-publicist twat is inspired and virtual unknown Jessica Barden steals every scene she appears in as the oversexed schoolgirl whose devious plans drive the whole plot. Supporting cast aside, however, a film like this needs fantastic lead characters to carry the story. They simply weren’t there.

Dominic Cooper and Luke Evans were both a little wooden, but given their pitiful characters – clichéd rocker and chiselled bumpkin – it’s hard to see how they could have injected much life into the roles. The big loss, though, is the eponymous sexpot herself. I felt so sorry for Gemma Arterton I could’ve cried. Tamara Drewe is a relentlessly one-dimensional slag until her antepenultimate scene, at which point she has a ridiculous epiphany and becomes a good little wife figure just in time for the fade-out. The film’s message is ostensibly about eschewing the trappings of urban life for simpler pleasures, but Tamara demonstrably learns nothing until someone behind the scenes flips the ‘Camden/Cranford’ button and she becomes an earth mother.

The script has some high points (“I hate cows. They exude bovine malice” was the most LOL-worthy moment for me), but by and large it relies far too much on swearing, cheap gags and every sinuous curve of Gemma Arterton’s nubile frame. WE GET IT, Stephen, she’s incredibly beautiful – it’s just probably not right that she seemed more exploited in Tamara Drewe than The Disappearance of Alice Creed. It’s not a bad film – we enjoyed it, sort of – but given the director, source text and cast it should have been a great one. Disappointing.