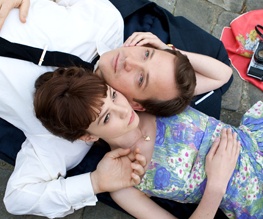 An Education is based on a memoir by journalist Lynn Barber; a story of a16 year old girl caught up in a romance with an older gentleman in the late 1960s. Though the premise suggests a story of seedy seduction and pseudo-paedophilia, Hornby’s adaptation neatly sidesteps this danger to create instead an utterly charming, smart and witty alternative to the traditional Rom-com.

Our Kind of Teaching…

This is a very clever film for a number of reasons.  Firstly, the performances are universally flawless. Carey Mulligan plays the lead, Jenny, a girl whose ‘Oxford University’ future has been mapped out from birth by her parents and teachers.  Though her eyes are set on her A -Levels, the rest of her has always been tempted by the (apparent) evils of French music, cigarettes and a life of romance.

When Jenny meets David (a charismatic and wonderfully underplayed Peter Sarsgaard), an entirely different world of passion, art and excess is opened for her. She suddenly finds herself caught up in the very world she has always dreamt of, and nothing she has left behind seems important by comparison. Mulligan’s performance is glorious, managing to encapsulate both young girl and developing woman with a charm and innocent warmth that is wonderful to see.

Hornby’s writing, combined with the talent of Sarsgaard and Mulligan, mean that we too can’t help but get caught up in the world David presents us with, however inappropriate it seems at the outset. What could have come off as creepy seems only awkwardly romantic, the morality questions of their entanglement hang in the air but never crash down on the performances. The supporting cast includes Alfred Molina and Cara Seymour as Jenny’s disapproving but naive parents, and a sleek Dominic Cooper and Rosamund Pike as David’s exotic and oh so seductive friends. All deserve just as much praise as the leads for their honest and brilliantly funny performances.

The story itself is not original; it has echoes of films like Educating Rita and The Great Gatsby. However, this is not to say it is not a thoroughly entertaining ride, for it is. It helps that the film is also beautifully shot, sumptuous to look at and makes you sigh with the strange desire to join the two lovers in their illicit world of luxury.

If you’re looking for a love tryst with a difference, An Education is for you. It’s sharp, funny, beautifully observed and packs enough of an emotional punch to have you asking a few questions of your own by the end. Film makers everywhere, take note; this is how you make a Rom-com. An education indeed.