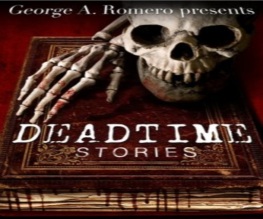 Romero introduces the three Deadtime Stories, in cheesy, macabre delivery à la Cryptkeeper. As if in the name of sheer continuity, Romero’s wraparound segments, riddled with sickening puns and ill-humoured quips, portend of exactly what we can expect from the sickening, ill-humoured shorts themselves.

Valley of the Shadow

Directed by Monahan, Valley of the Shadow follows a woman on an expedition to a forest/jungle/backyard, supposedly in another country, where she and her party search for her husband who disappeared while searching for the “FRUIT OF IMMORTALITEEEEE”. Silent natives/white guys in body paint signal their displeasure with violent attacks via mini-darts and threatening grimaces. An antiques dealer (Mancuso) warns an alcoholic beachcomber (Monahan) that the treasure he’s found buried in the sand is far more dangerous than it looks. Lo and behold, the beachcomber heeds not the advice and pays the ultimate, gory price. Directed by Michael Fischa, Wet attempts to exhume ancient maritime mythologies, setting up the fantastical/cheesy concept of malevolent mermaids as the plot’s Big Scare.

Time lapse shots of driftwood and dripping taps try terribly hard to pass for contemplative, suggestive film ‘style’ and dialogue that (literally) takes place in the shadows attempts to impress a quasi-intensity. Tacky yet effortful, these devices do, however, build up towards the short’s only redeeming-ish quality – atmosphere – but any understated effectiveness is swiftly disposed of when a Siren-style fishwoman snacks on some man-bits in a grand guignol of bright red squirts and plastic terror. An old country doctor pays a visit late at night to assuage a middle-aged woman’s fears; her teenage son, tied to his bed by his request, raves about being bitten by a powerful creature. His mother relates what he’s told her through a series of flashbacks, leading to a neatly predictable conclusion.

With an aspect ratio of an old-time camera and dense, darkly lit conversations via close-ups, Housecall begins as a stylishly shot, mildly interesting digression from the first two shorts. Focused direction reveals the potential for horror within the familiar; the scream of the teapot, confined spaces, the nerve-wrecked mother, the practised reassurance of a doctor. Sadly, the narrative quickly takes a hackneyed turn towards fang-bearing clichés, and the stylish ‘period’ atmosphere becomes little more than disappointing and claustrophobic. Interestingly, legendary makeup artist Tom Savini is credited as the director on the third segment, but the credit isn’t mentioned on the press release. Perhaps Savini experienced a moment of clarity and yanked his name from the junkpile. The eternal mystery is why Romero didn’t share the same self-preserving sentiment.

To cut an interminably long Deadtime story short, the scariest thing about this collection is that there’s more to come – this is just Volume 1. 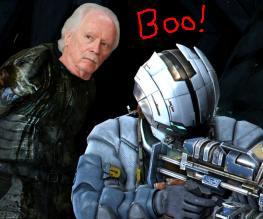