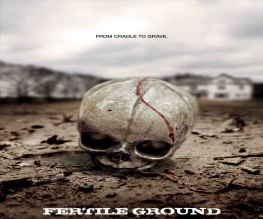 The opening scene of Fertile Ground introduces us to a vivid, near full-frontal of what is to be the film’s first device for inducing horror: Pregnancy. Emily (Hailey) and Nate (Harold) Weaver are expecting their first child, and the happy couple throws a party to celebrate the impending arrival – and Nate’s recent art show success. Life is grand – that is, until, the thinly-painted, chic city-slicker/Pleasantville veneer is shattered mid-party – in an uncomfortably grotesque visual of a bloody Emily grasping in a pool of her own miscarriage.

The moment should be horrifying, but Hailey’s character is just too insipid to evoke any real empathy, and Harold is so awkwardly disconnected from his that his deadpan reaction to the death of the unborn child mirrors our own. An earlier mid-shot of Hailey caressing her belly and parading her unnervingly large nipples is far more disturbing than the self-aborted foetus scene; we can’t help but wonder if within Emily’s womb swims the pastiched reincarnation of Rosemary’s Baby – but we are far too ambitious in our ponderings. Fertile Ground offers up no Antichrist-like Omen offspring to wreak chaos and carnage, and the film’s actual twin pinnacles of terror are a) the realization that its Grand Guignol is really just the Perinatal Spectacle itself (with the only believable preternatural element being the size of Hailey’s areolas), and b) that there are still 60 excruciating minutes of similarly uneventful, subtextless boredom to endure. Seguing into the film’s second (and only other) ‘scare tactic’ – the Haunted House, Emily and Nate move out of the city, into a semi-Victorian house in the styx, in an attempt to forget their past life and the memory of their unborn child. Their new residence has, however, a hidden history of its own, and the lethargy that is passed off as ‘plot’ attempts to revive itself with a lame pseudo-channeling of Amityville-ish ghosts.The standard artefacts of the Haunted House each make their obligatory cameo: the out-of-place cobwebbed cradle, the ominous basement (and the light bulb that faithfully pops first try), the re-appearing handprint on the window pane, and an antique trunk full of mouldy secrets. The only thing left to exploit from the hackneyed trope is the supernatural possession of the residents and the murder by numbers game – both of which Fertile Ground executes in a flawless demonstration of ill-fitting, bland quasi-realism and absolute, uninventive non-imagination. You might ascertain that such an uninspired, stylistically barren approach to the Haunted House theme and Pregnant Horror sub-genre is a metaphor for the banal trappings of family life, but Gierasch and Jace Anderson, writers of other such intellectual wastelands as Autopsy, The Toolbox Murders (2004), and Mortuary, are really not that aspirational. The non-event Fertile Ground concludes and is readily forgotten, save for perhaps the final scene of ambiguous revelation – whose vague modicum of impact is nevertheless about 94 minutes too late.

Previous: WIN: FADING OF THE CRIES on DVD!
Next: Monday Mash-Up – Super 8 Edition #1!