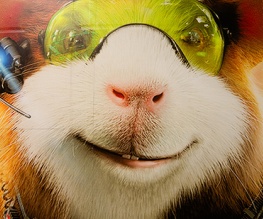 Hey! Guess what? Most spies are human. That’s a given. To do all that fiddly spy stuff with the gizmos in the watches and the gas-powered grappling hooks you really need an opposable digit or two. So it’s been left up to Disney to challenge our hackneyed, olde-worlde beliefs by presenting us with a bunch of spies that take the form of… wait for it, you’ll love it… Guinea pigs! Yeah, those infanticidal, hooting, air-sniffing pigs. As spies.

It’s a pretty one-note joke that’s taken to a bit of extreme – Pixar would’ve made an idea like that into a witty ten minute short. Here, however, it’s  90 minutes long, and generally one ninth as entertaining, too. The story is thin and whimsical – evil industrialist Leonard Saber (Bill Nighy) plans to dominate the world using a transforming bunch of coffee pots with only the aforementioned rodents (played variously by Sam Rockwell, Penelope Cruz, Steve Buscemi and , Nicolas Cage) to stop him. While the big names add up, the performances don’t, and the snazzy animation and too-cutesy design can’t mask a bunch of pretty lazy performances.

The film is also too interested in snazzy action sequences and extended chases, neglecting to providing genuine laughs or decent characters – perhaps due to producer Jerry Bruckheimer, who brings his characteristic light touch from other such Palme d’Or favourites as Gone in 60 Seconds and National Treasure. What laughs there are generally depend on flat pop-culture references that are too obscure for the kids and stale for adults. The characters are nebulously defined by whatever special-ability schtick they’ve been given (the fly is reconnaissance! Geddit?) and plod through each scene until they’re given more explosion-dodging and zip-wiring to do. Tag on a “The Power Was In You All Along” message for the kids and you’re left with a pretty hollow movie, of interest only to those with an attention span the length, funnily enough, of your average guinea pig.

Previous: The 5 Lessons Hollywood Teaches Kids About Life
Next: Transformers: Revenge Of The Fallen