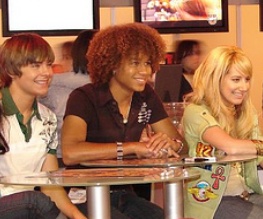 You can worry all you like about schools these days. You can fret over the creationism debate, pull your teeth out about drinking and drugs, weep tears of solid oak about the abandonment of school uniform. But the truth of the matter is that kids learn all they need to know from films, and perhaps it’s these lessons we need to be concentrating on. Have you seen your kids lately? They watch the Jonas Brothers from the comfort of their own wrists. They can download Back To The Future parts one, two and three in the time it takes you to stand up from your big chair. Not that they would, as they have no idea what Back To The Future is. They’re too busy watching Zorgon The Mega Future Robot With Extra 3D Death or whatever. But the point is, in the time it took you to read this, they’ve learnt more than you ever will. Depressing, isn’t it?

But fear not! Our crack team of analysts (we put on some long coats and beards) have spent literally an unspecified amount of time figuring out the hidden messages in classic kids films, so that we can take a look at the future of our children. How will they make decisions? Who will they trust, and why? Will they be the generation to finally expose Nicholas Cage as the door-wedge that he is? It’s all here, and it’s all terrifying. Brace yourselves oldies, it’s time to walk a mile in some tiny shoes.

How many times a day do people in beige hats and too much skin murmur shakily “Ohhh, the young today. No Respect. No respect at all.” A lot of times. A lot of times a day. But should this really come as a surprise to us? Almost every kids film ever made has shouted gleefully that kids are more intelligent than adults, and should do as they blinkin’ well please. Nowhere is this more evident than in Home Alone. First of all, the Adults- the stupid, scarf wearing, book reading, dead eyed idiots that they are- forget a child when they go on holiday. And then they do it again. In two more films. That’s enough to lose hope in the grown-up world in itself. But then you’ve got the jaw-achingly brain-dead criminals who can’t even open a window without their arms falling off. Not exactly an awe-inspiring vision of maturity. Give a kid a paint can, and he’s a one man SWAT team. This is the war-cry of a generation.

What You’re Wearing Dictates Your Character

Then we go on to complain that these young of today don’t know what they’re doing. Well no. Why should they? In kids’ films- from Disney to Dreamworks to Pixar, the baddies look like baddies, and the goodies have big eyes and grins made of happy diamonds. Who is the evil one? Well, that shadowy figure lurking in the corner probably, wearing a cape and holding the dead kitten. Ursula? Evil. Jafar? Evil. Scar? So obviously evil. And often-times life just isn’t that easy. Mr Wiggles, the happy ice-cream man just down the street? He’s actually a massive wasp. And he wants to kill you.

Got a Problem? Sing about it!

In terms of expressing deep-down emotions- a tricky thing for kids no matter what age you’re born into- we can’t help but admit we’ve given the youth of today very little help. Except to suggest that they sing about it. The High School Musical, Camp Rock and Hannah Montana phenomenon has promised an entire generation that if you’re having an internal struggle, the only thing to do is to open your mouth and sing your very kidneys out. And hope that everyone else will join you in an attempt to solidify your bonds of friendship and aid you on your quest. But, of course, they won’t. They’ll hit you with pipes. They know that, we know that. What we’ve actually done with these films is present a solution that does not exist, probably causing even more internal despair for kids everywhere. Zach Efron tells them one thing, pure, unabashed logic tells them another. Who is right? What will win? Oh God, even we don’t know anymore. No wonder they turn to pipe crime, it’s the only thing that makes sense.

If You’re Ugly, You’re Over

In the world of grown-ups, it’s possible that Nicholas Cage can star in essentially every film ever made, giving hope to the talentless, ugly and (probably) sour smelling members of our society that they too can reach magnificent and inexplicable success. And yet children, the more fragile and hope-filled among us, are forced to come to terms with the fact that if they don’t look like a young Jessica Alba, they’re going nowhere. The stars of High School Musical are so unbelievably plasticine-ily perfect looking they could be mistaken for the Hollywood equivalent of Wallace and Gromit. Except for the one fat one that’s always in the background somewhere. In the background. Exactly.

Single parent? It’s up to the kids!

Know it all bloody kids eh? Never listen to a word we say, harrumph and such. Well what the heck do we know, anyway? If anything, we should be begging the kids to help us out, as they’re our only hope for a happy ending! Whether it’s One Fine Day, where George Clooney and Michelle Pfeiffer dance around each other for 90 minutes, or those parents who got all trapped in The Parent Trap, if you’re a single parent it’s up to your child to find you love. We’re pretty sure it happened to Tom Hanks and Meg Ryan too. No not that film, the other one. It’s clear that if you’re a young single parent, your kid is savvy, wise-cracking and probably a hell of a lot cleverer than you. So when he/she tries to set you up with that tramp who gives them free gum every week, think before you’re violently ill. So what if she loves setting things on fire? The heart wants what it wants

Based on the above analysis, we can safely say that the next generation will be a fine one. They will know everything about everyone, but will also judge a person’s worth solely on the colour of their tie. They will have a lot of plastic surgery to look like a dolled up Morph from Sm-Art, and if you ask them why they will reply “what the hell can you know about it? Or anything? You left me at home for Christmas again! Oh God how I hate you”. They will be insecure, knowledgeable, angry, pushy, wear lots of bright colours and be always on the look-out for potential extra parents. Oh dear. What’s to be done eh? Only one thing for it we suppose, everybody, “WE’re ALL in THIS TOgetthherr la la la something something lala WE SEE THAT!” Whew. That’s a lot better.