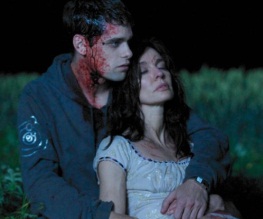 The story begins soon after Sarah (Anne Parillaud) has moved her family to the isolated tranquillity of the French countryside in an attempt to capture the good life; she’s got a hard working husband who’s tirelessly slaving away to finish their new idyllic retreat, and a moody teenage son on the verge of completing his studies. However, trauma shatters her rural haven when her son throws himself to his death from his bedroom window in a fit of adolescent angst.

A year on, and Sarah is a ruined shell of her former self. Her husband is no longer on the scene and she seems to escape from the realities of her dire state by immersing herself in her work at the Hospital. After a particularly strong ticking off from the Ward Sister, Sarah plods home to her lonely country castle – but what’s this? The police are warning of burglars in the area, taking advantage of the empty homes during the holiday season. Sarah continues on through the darkening woods, seemingly spooked out by the idea of burglar types operating nearby before literally bumping into the exhausted figure of Arthur (Arthur Dupont). Young Arthur has been running for his life, having seen the crook’s face he now fears that the burglar will stop at nothing to prevent him from identifying him. Sarah takes the youthful-Arthur under her maternal wing as they retreat to her house – the perfect hiding spot with NO telephone and NO secure doors – to await morning to go out and notify the police. What could possibly go wrong?

In Their Sleep is a very brisk horror/thriller, falling just shy of an 80 minute running time. It’s fortunate then, that we don’t have to wait too long for the ‘horrifying/thrilling’ bits – after a fairly tedious 40 minutes of Sarah displaying her inability to cope with the loss of her dead son, and her insane hopes to reach out to Author to regain the maternal capacity she’s craving, the film’s one and only twist creeps up on us with all the subtlety of a one man band with Parkinson’s. There’s a fairly satisfying context building flash back, filled with creepy throat slitting and child stabbing action, but that’s all that In Their Sleep has to offer, as it unfortunately lapses back into the same rut it began with, as Sarah tries desperately to work out what’s really happening.

That said, Anne Parillaud is brilliantly desperate, and allows the 80 minutes to pass with less pain than could have been inflicted were the lead role to have been handed to a lesser actress. As she becomes increasingly suspicious of Arthur, the story gains a touch of much needed depth as Sarah struggles to understand if she’s reaching out to Arthur as a mother or a lover. It’s a shame then, that beyond the substance of Anne’s performance, there’s not a lot going on; the dialogue is extremely thin on the ground, which makes even 80 minutes of film a bit of a trial to endure. The gore is plentiful and the flash-backs are intertwining, but the mystery and threat of the film’s narrative is never compelling. Previous: Short Film of the Week: Mark Macready and the Archangel Murders
Next: Bella