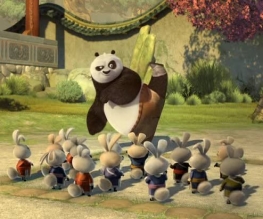 When you don’t know that Secrets of the Furious Five is a miniature movie it is a little bewildering (or may I suggest, kung-fu-sing) when the credits start rolling after 24 minutes. The film is set up like a full length animation, so when Mantis, Viper, Crane, Tigress and Monkey (aka, the Furious Five) depart it makes you feel like you have turned up to a party just as everybody is leaving. Stood there with a limp party horn hanging from your bottom lip, no one can blame you for feeling a swell of resentment towards the big panda hosting the event.

Most of the original cast are absent for this fleeting return. Jack Black is still the voice of Po, but his five comrades are almost entirely new characters (owing largely to the fact the film tells the story of their tumultuous journeys as youths). Pair this with the absence of the sophisticated animation that made Kung Fu Panda such a delight, and it just feels like something of a cheap imitation. The message that Secrets of the Furious Five delivers is valuable. The film tells how each of the Furious Five grew from troubled/troublesome children into true masters of themselves with the five key principles of Kung Fu. Advocating the importance of patience, courage, confidence, discipline and compassion, with the goal of achieving “excellence of self”, this little animated novella has a moral warmth that is perhaps missing from films outside of the family genre. However, it is simply neither long enough to keep the little ones entertained for a substantial amount of time, nor inexpensive enough to warrant buying it separately from the original DVD.

It is cute, it is very succinct, but it has undoubtedly been released to bring in the dollar. As a special feature it is wonderful. As anything other than that, I’m not sure that Secrets of the Furious Five is worth the purchase.

Extras on top of what is essentially an extra? Let’s nip this madness in the bud and just watch the original.