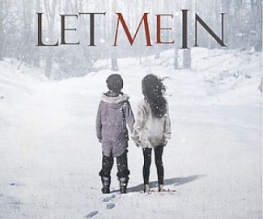 The news that Tomas Alfredson’s superb adaptation of drama/horror novel Let The Right One In was to be given the Hollywood makeover treatment was met with fairly substantial groans of dismay on all sides – particularly when Cloverfield director Matt Reeves was attached to direct. I was lucky enough to catch a preview screening of Let Me In at this year’s BFI London Film Festival, and my initial reaction was that Cloverfield‘s one-dimensional action did nothing to showcase Reeves as the talented and thoughtful director he really is. Let Me In is a rip-off, but it’s so lovingly made you won’t mind.

The place is New Mexico, the year is 1983 and poor Owen (Smit-McPhee) is an skinny, bullied 12-year-old introvert of the type we’ve seen a thousand times before. His dad’s run off with a good-time girl, his mum’s slipping into a serious drink problem and each school day is punctuated by encounters with sadistic student Kenny (Dylan Minnette) and his henchmen. Friendless and lonely, he spends his evenings playing with a Rubik’s cube and fantasising about wreaking revenge on the bullies.

When Owen meets Abby, the little girl who’s moved into the flat next door with her father, she tells him that they can’t be friends. Nevertheless, after she gives him the courage to stand up to his tormentors at school Owen realises he’s found a kindred spirit – another lonely and neglected child who thirsts for companionship and love. Little does he know, however, that Abby’s thirst is rather more literal than his. When people in the town start falling prey to a ritualistic murderer, Owen is forced to face up to the fact that his only friend may be suppressing her true nature – that of a feral, unstoppable vampire. Can their friendship survive such a revelation? It’s not like he has anyone else to turn to…

First and foremost, it is important to emphasise that this is a remake of the film Let The Right One In – it is in no way a fresh adaptation of the book of the same name. Director Matt Reeves has taken his visual homage to the 2008 film to extraordinary lengths, creating some scenes which are virtually shot-for-shot copies and including various insignificant but memorable details such as a geometric climbing frame. Now, I know I’m on record as not being a fan of remakes, but it’s impossible not to be impressed with the meticulous care which has gone into transposing what was already a superb piece of work into a more accessible language and setting. To his credit, Reeves also resists getting too violent and trades a little horror for drama for the sake of cementing loneliness rather than gore as the film’s central theme.

To treat Let Me In as a complete rip-off, however, would be to denigrate the extraordinary performances which take it into a league of its own. The supporting cast is reliable, with Richard Jenkins’ nameless Protector particularly well-realised, but it’s the two child stars who will stick in your memory. Kodi Smit-McPhee, who takes on his second starring role after appearing in The Road, combines nerves with an unpleasant darker side to create a realistically brittle and suspicious Owen whose guard gradually comes down as he gets to know Chloe Moretz’ Abby. Moretz herself gives a jaw-dropping performance – it’s almost impossible to believe that she’s only thirteen, such is the gravity and depth of her embodiment of the girl who describes herself as “twelve… but I’ve been twelve for a very long time”. It’s probably just as well that Moretz’ mother won’t let her see the completed film; seeing oneself give such an assured performance at such a young age would be liable to induce Alexander the Great-esque despair at there being no more worlds to conquer.

Let The Right One In didn’t need remaking – but we’re so glad that Hammer bothered anyway. Between the two films, author John Ajvide Lindqvist’s debut novel has received one of the best on-screen treatments of recent years.

Let Me In hits UK cinemas on the 5th of November. Bonfire Night can officially do one.

Previous: Rhys Ifans as The Lizard in Spider-Man reboot?
Next: Life As We Know It