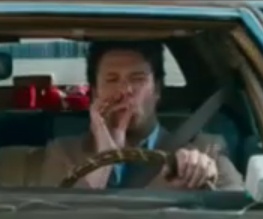 Frat-boy stoner comedies and Seth Rogen are pretty much synonymous these days, so it’s another case of knowing exactly what you’re in for when you pick up Pineapple Express from the shelf at the DVD store. But we at Best For Film are big proponents of the ‘if it ain’t broke, don’t fix it’ comedic philosophy – just as Cameron Diaz plays the bubbly girl-about-town with perfection and Hugh Grant the bumbling posh man, Rogen does a darn good sarcastic, overweight misfit. And in this zany outing, where pothead Dale (Rogen) and his dealer Saul (James Franco) are accidentally embroiled in a drug ring murder, Rogen pushes the boundaries of the ridiculous to extreme degrees. Under anyone else’s handling, Pineapple Express would probably be terrible, but given the Seth treatment (he wrote the screenplay as well as starred), it’s just crazy enough to work.

Dale Denton is a lazy stoner who is (somehow, inexplicably) dating a teen hottie and spends his days alternately phoning up radio stations to rant about the world and frequenting his dealer Saul’s house to top up his marijuana supply. An instance of the latter goes horribly wrong one night when he witnesses a murder committed by the man at the top of the drug ring for which Saul is a distributor. Thus begins a hilarious, nonsensical and pot-induced journey as the two men go on the run from the baddies, who have the cops on side too (that can’t be good for one’s already amplified sense of paranoia when stoned).

About halfway through this film, the plot goes completely mental. Like, completely. But it’s in that enjoyably mental way which is quite reminiscent of the all-in news-caster brawl in Anchorman – Rogen definitely has Will Ferrell’s gift for dreaming up ridiculous scenarios from nowhere. And also for improvisation – one particular scene between he and Saul’s supplier Red (Danny McBride) is 15 minutes of pure rapid-fire, off-the-cuff retorts zinging back and forth between the two with seemingly no scripting whatsoever, and it’s all absolutely hilarious. Franco, more notable for his recent dramatic roles in Milk and the Spider-Man trilogy, proves he’s got potential as a comic actor too – he’s dwarfed by Rogen, of course, but he doesn’t make a bad support.

Directed by virtually unknown name David Gordon Green, and featuring a support cast of small-timers too, this is undoubtedly Rogen’s film to carry, and he does it well. The low-budget aspect has given him a bit more to play with in terms of blurring the boundaries of believability too, which can be a bit overwhelming until you accept the fact that things have gone way beyond making sense. But apart from the ridiculousness of some of the goings-on in this film, it’s really Rogen at his best, and it’ll keep you in stitches for long enough to be worth your while.

Previous: The 2010 Writers Guild Nominations Are In!
Next: Cinema Preview: 15th – 22nd January