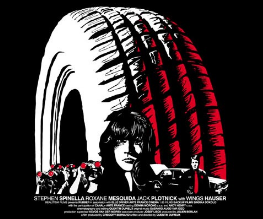 A car drives slowly down a dusty desert path, lazily weaving its way so as to obliterate some wooden chairs that have been placed on the road. It stops suddenly, and a police official climbs out of the trunk, taking a glass of water from the driver. Gazing steadily at the camera, he delivers a monologue about the joy of films that do things for “no reason”. He pauses, pours the glass of water onto the ground and then walks away. It’s a great opening – slick, interesting, tongue-in-cheek -and it sets the tone of the off-beat Rubber beautifully. Apparently not wishing to dwell on “big ideas” for too long (a smart move), we’re then quickly introduced to the officer’s audience – a group of people in the desert who have apparently gathered “to watch a film”. Another official of some sort hands round binoculars, and they are told to focus on a tyre in the distance – a sentient tyre by the name of Robert. Robert’s adventures, it seems, are to be the ‘film’ we’re all witness to. With that, we cut to Robert and, after a few faltering steps (spins?), we’re off. And it turns out Robert likes to kill things. All the things.

Whilst watching Robert explode whatever poor being crosses his path, sinister events put the entire binocular-clad audience in jeopardy. The question is, if the entire purpose of Robert’s ‘film’ and its ‘actors’ is to perform for an audience, what happens to them if there isn’t an audience to perform to? Should stories still get told if there’s no one to hear them? So, yes – it gets fairly meta fairly quickly, and is content to bat around various concepts (Schroedinger’s audience? purpose of storytelling? meaning of reality?) without ever really committing to exploration of any of them. Those who aren’t happy to indulge in a relatively meaningless flight of fancy will get frustrated after twenty minutes or so, but for those who are content to sit back and let it all wash over you Rubber is a playful and well-made bit of fun. Meant to make you question traditional cinematic storytelling rather than provide you with a completely satisfying tale, it’s a fresh and funny take on horror/comedy and on the nature of film-making in general. The effects used are brilliant, the visuals lovely and director Quentin Dupieux obviously relishes the absurdity of it all; crafting every shot with style and confidence.

Because of its jocular nature, and the slightly ‘one joke’ edge (“OMG it’s a TYRE and it’s KILLING LOLZ”), it probably would have benefited from a bit of trimming – 85 minutes, guys? Really? But there’s no denying that in an industry glutted by copy-paste serial killers, it’s refreshing to see something a little different. There’s certainly no-one out else quite like the cranium-exploding, human-hating water-resistant Robert. Thankfully.

Previous: WIN: 3 x BLOODED on DVD!
Next: Orange(Wednesday)s and Lemons #12