film season, which will be exploring life, death and everything in between. This week we’re struggling to get to the bottom of Marc Forster’s psychological drama Stay. " /> 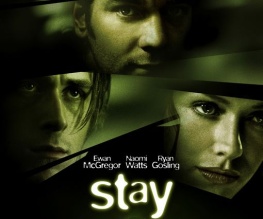 Blurring the lines between fantasy and reality, Stay is a film which seeks to question whether reality and meaning are objective or self-created concepts. It follows psychiatrist Sam Foster (McGregor), a troubled man who has forced himself to come to terms with his girlfriend’s suicide attempt only to be confronted with a patient who calmly tells Sam that he will kill himself in three days time.

Henry (Gosling), the patient, is an articulate student who claims to be an orphan, but as Sam digs into his back story it becomes increasingly difficult for him to distinguish between Henry’s past and the hallucinations which threaten his sanity. Are Henry’s parents really dead? How is he exhibiting an ability to predict the future? And why does it seem as if the voices he hears are contagious? Time is running out for Henry as Sam rushes to unravel the mystery of his surreal situation.

Stay is hampered by its massively predictable Owl Creek-style ending, which is inescapably obvious by around fifty minutes in – I started to feel quite resentful of the way the story was dragged out once I’d worked out where it was going. However, it’s still an enjoyable watch, and although the overall plot is a little tired it is boosted by a fresh and compelling script from Kite Runner screenwriter David Benioff.

However, its real draw is a series of fascinatingly understated performances from the lead cast. Ewan McGregor was convincing as the self-assured man who begins to lose his grip on reality in a performance reminiscent of Tim Robbins in Jacob’s Ladder, and Naomi Watts was her usual superb self as his quiet and shadowy girlfriend whilst Bob Hoskins, ever a treat to watch, appeared in a supporting role as Sam’s mentor. The undeniable star of the show, though, was Ryan Gosling. Stay marked his first appearance after the cinematic abomination that was The Notebook, and if there was any doubt that he was a serious actor as well as a tear-soaked twazzock then this film scotches it. You may not be enthralled by Stay‘s tired story, but Gosling’s neurotic and emotionally charged performance will ensure your time wasn’t wasted.

Previous: Warner Bros Studios to be rescued by Superheroes
Next: Super 8 casts a Super 9?