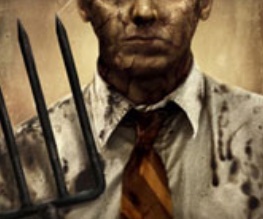 A cosy Midwestern town where the smiles are shiny and the cakes are plentiful is the tranquil setting for a sudden bloodthirsty apocalypse in The Crazies. Executive produced by George A Romero, who redefined the horror genre with Night Of The Living Dead, Breck Eisner‘s suspenseful yarn pays homage to the 1968 zombie classic with a big fat shout out to the dangers of experimental bio-weapons. Still, who needs subtelty when you’re being chased by a man with a chain-saw?

Once upon a beginning

The film opens with a raging inferno sweeping through the quaint community of Ogden Marsh , then rewinds to two days before to meet Sheriff David Dutton (Timothy Olyphant), who presides over the God-fearing residents with his deputy, Russell (Joe Anderson). An unfortunate incident on the baseball field casts a dark shadow over the picture postcard town, but this is just the start of the nightmare. Family man Bill Farnum (Brett Rickaby) commits a horrific act against his wife Deardra (Christie Lynn Smith) and child (Preston Bailey), and is thrown in the police cells. The change in the usually chipper temperament of friends and neighbours troubles David, and he discovers the answer in the local creek which feeds into the water supply.

Before he can contain the problem, masked soldiers storm the stricken town, identifying those lucky few who have not yet contracted the illness. David’s wife Judy (Radha Mitchell) and her young assistant Becca (Danielle Panabaker) are condemned to isolation with the other infected residents, while David is ushered towards transportation from the outbreak. However, the sheriff refuses to leave behind his wife, and embarks on a suicide rescue mission, with Russell covering his back. Hell yeah!

Whatever happened to taking aspirin?

Ridiculously dreadful title aside, The Crazies sustains tension well and peppers the escape from the quarantined town, with lots of jump-out-of-your-pants shocks to ensure more popcorn ends up on the floor than in your mouth. Eisner, who previously directed Sahara, and will take the helm for the forthcoming remake of Flash Gordon, skilfully orchestrates the action sequences; a fight in a mortuary involving a small, electrical saw will have men in the audience wincing with sympathy pains, and a showdown in an automatic car wash will ensure that you’ll be hand washing your vehicles for years to come.

Close your eyes for this bit… and the next bit. And the next…

The Crazies should satiate the blood-lust of horror fans, culling large numbers of residents from Ogden Marsh by gun, kitchen knife, garden fork and even flame thrower (every small town should have one). A centrepiece sequence in a hospital ward, which finds Judy and Becca restrained in a room full of lunatics and unable to escape a grisly fate, is brilliantly staged to crank up the tension. The awesomely named Olyphant is a likable, yet flawed, lead, who allows his love for the people around him to blind him to the truth. The denouement veers wildly towards implausibility to deliver an almighty bang, but does neatly set up a potential sequel. All in all, a great gore-fest for those who likes their movies infected and diseased (and who doesn’t?), but not for the faint of heart. You’ll never look at a glass of water the same way again.

Have you been infected with The Crazies bug? Let us know below!

Previous: Alice in Wonderland: The Reviews So Far
Next: Leap Year