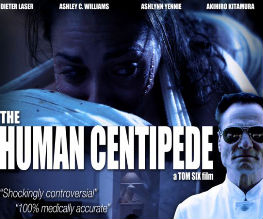 If you know the film’s premise – three tourists (Ashley C. Williams, Ashlynn Yennie, Akihiro Kitamura) in Germany being stitched together arse to mouth at the hands of a crazy Doctor (Dieter Laser) – then you pretty much know the whole plot. It is certainly an original and revolting idea for a horror film, but director Tom Six doesn’t really know what to do with it. The whole film feels rather like visiting a freak show. We are presented with this monstrosity…and that’s pretty much it. There is very little conflict or conversation, seeing as two parts of the centipede can’t use their mouths and the one that can only speaks Japanese and therefore can’t engage with the German doctor. There is little else going on other than the centipede itself, and hence once you have got used to the concept of the film the whole thing becomes rather dull.

This is a shame because there are flashes of – dare I say it – brilliance within the film. Dieter Laser’s central performance as the demented doctor is one of these flashes. It is a role that could so easily been derivative of the many crazy doctors that litter horror film history, yet Laser makes the role frighteningly original. His steely veneer allows only a few tantalising touches of crackpot to reach the surface. It is a sharp, scary and darkly comic performance that proves ultimately more interesting than the centipede.

Worth more than the sum of its parts?

Thematically the film flirts with big concepts. It is no accident that the nationalities in the film are Japanese, American and German, echoing World War 2, and the film revels in the Doctor’s parallel with torturous and experimental Nazi Doctors. It considers the effects or brutality and torture through the audience’s changes relationship to the centipede – we go through sympathy, disgust, hatred, until ultimately the centipede does become a creature to the audience as opposed to three people sewn together. But the film isn’t ultimately interested in any of this – it flirts with something deeper, something funny and indeed something gory, it never fully develops any of these areas. While the audience can get past the concept and search for something more it is the film itself which is unable to get past its central premise.

While The Human Centipede was a lot better than expected, that is not actually saying very much. Six has largely held back on the gore, knowing the central premise is disturbing enough – but a good horror film is more than just an empty concept. While the film does deserve some sort of credit for coming up with an original idea, that is just what this film feels like – an idea. One that’s not been fully developed or explored and fast becomes a bore. Do not believe the hype.

Previous: Will Darren Aronofsky direct Wolverine 2?
Next: The Girl Who Played With Fire