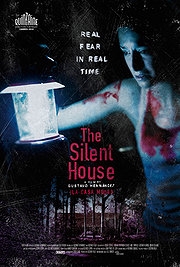 Walking towards a dilapidated cottage, a middle-aged man – Wilson (Gustavo Alonso) – turns to his daughter Laura (Florencia Colucci) and observes; “it’s so neglected out here.” As they push aside the long grass and cup hands around their eyes to peer through the property’s boarded up windows, you could be forgiven for thinking that The Silent House’s setup is typical of its genre. And with lantern light soon guiding our way around shadowy corners, it’s not long before you’re expecting the first jump – probably one of those false alarms caused by a falling toolbox, or the flapping of a trapped bird – just to set the mood. Sure enough, something quickly goes bump in the night, leaving Laura to explore the eerie house alone, unaware of who or what might be lurking upstairs.

Yet something is different; already we feel firmly linked to Laura’s fate, like we’re following her every step of the way – probably because we are. Not once since the film began have we lost sight of our young protagonist, not just because of the small cast, but because the camera has literally been tracking her the whole time, with no discernable cuts. Supposedly shot in a single 78 minute take, this is the Uruguayan horror’s ace in the hole and, once noticed, it keeps you hooked throughout.

With the majority of the film progressing with little appeal to a background plot (one other actor, Abel Tripaldi, fills out the role of Wilson’s friend Néstor, who is having the central pair fix up the house so that he can sell it on), it falls to director Gustavo Hernández’s technical skill to sustain the narrative drive. He succeeds admirably, demonstrating impressively that a singular camera does not necessarily equate to a singular perspective. In some moments, the audience serve as Laura’s voyeur – willing to watch, but reluctant to intervene. Then, suddenly, we are Laura herself, spinning desperately in the dark as we search for the onlooker we were playing just moments before.

Yet despite its merits, such an approach also lays down a stumbling block. Fascinated by The Silent House’s one shot technique, it’s possible to find yourself distracted rather than gripped – caught up in spotting possible cut points, instead of being scared by the story. Which brings us to another matter; a great deal of The Silent House’s plot is essentially delivered retrospectively, with its concluding revelations inviting us to look back and examine what we’ve just seen. The problem is, when we do, it doesn’t actually make much sense, thereby nullifying much of the hard work that went into its build up. Though the result does not undo Hernández’s work, it does tarnish it. If only the house had retained just some of its secrets, this film may have been a classic and not just a curiosity.

Previous: Top 3 Biopics that never got made
Next: Monday Mash-Up – Super 8 Edition #7!