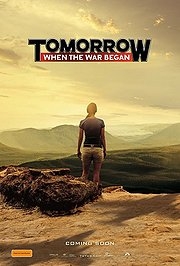 (Let’s get this over and done with early, shall we? That title. It’s kinda irritating. Not full-blown irritating, because it sort of makes sense, if we’re being generous and allowing some poetic license, but irritating because it’s slightly pretentious for no good reason. It means very little, aggravates naggingly, and is then gone from your mind. Much like this film. Zing.) Take a moment to think about the way any film ever made would have these characters develop, and you would be correct. Except that Ellie remains boring. While the teens are frolicking about in a creek – and, for some reason, savagely killing a snake – fighter jets fly overhead. What the hell? Well, it turns out that Australia has been invaded by a mysterious foreign force, and everyone in town has been rounded up and put in an internment camp at the local showground. Once they’ve seen someone get shot in the head, the teenagers decide that this just isn’t on and that they’ll have to fight back. Also there is some kissing and other relationship-type stuff. After some soul-searching, the religious girl machine-guns some guys.

The pros: there are some cool explosions.

The cons: none of the characters are particularly likeable. Some are so disagreeable I found myself actively hoping they’d be killed off. And the nature of the invasion isn’t fully explained, beyond some vague murmurings that the rest of the world supports it. Could this be a comment on Australia’s harsh treatment of asylum seekers? Or a grab for its natural resources? We’re not told. It’s all about the teenagers, man, and they don’t seem to give a fuck about politics. But the main problem is that the film doesn’t really have an ending. The Tomorrow book series has seven volumes, with another three in The Ellie Chronicles, so I guess it’s not really a surprise that all this first instalment does is set up the scenario for its potential sequels. But if those sequels never get made – and that’s a distinct possibility, as the Australian film industry’s not exactly swimming in cash – then what, precisely, is the point of this film?

Tomorrow, When The War Began isn’t good, but it’s not even bad enough to be memorable. If you choose to watch it to completion, you can rest safe in the knowledge that around 100 minutes will have passed. And that’s pretty much it.